Having recently seen the magical Monday’s Child, it’s no surprise that Leeds theatre company tutti frutti’s acclaimed 2012 production of Rapunzel has been selected to be showcased at the prestigious 18th ASSITEJ World Congress in Warsaw in late May. tutti frutti will be the only theatre company representing the UK at the congress which showcases the best theatre for young children from around the world.

ASSITEJ, the International Association of Theatre for Children and Young People, (Association Internationale du Théâtre de l’Enfance et la Jeunesse) was established in 1965 as an international alliance of professionals involved in theatre for children and young people. The congress, which takes place every three years, is a showcase for some of the best theatre for children from across the world to be performed as well as the sharing of practice through workshops, and seminars and opportunities to network with international colleagues. To perform at the congress you have to be selected by the hosting county and Assitej panel. tutti frutti is one of 22 companies chosen from the best children’s theatre from around the world to perform at the Congress. 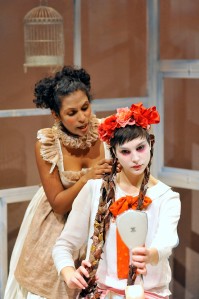 This year’s motto of the 2014 Congress is “FACING THE AUDIENCE”: theatre for children and young people who understand the changes its viewers are undergoing, follows them and reacts to them. Special focus will be given to three themes: theatre for the very youngest, theatre for teenagers and the inclusive theatre.

Rapunzel was adapted for the stage by well-known children’s playwright Mike Kenny, and the production toured the UK in autumn 2012. After its performances at the Congress in late May it will head to Hong Kong for a week long run at the Hong Kong Drama Theatre.

tutti frutti’s artistic director Wendy Harris, who has attended previous congresses, said about the news, “tutti frutti is absolutely thrilled to have been selected for a prestigious place on this world stage and we look forward to both showing our work to our international partners but also to engaging in conversation with them.”

Images by Peter Byrne. From information provided by Duncan Clarke.