The Wrong Crowd make visually inventive theatre for cross-generational audiences. Their new show, Kite, opens at the Soho Theatre in January as part of the London International Mime Festival 2016, before embarking on a national tour. We talked to Rachael Canning, co-director of The Wrong Crowd, and designer and puppet director of Kite, about the show.

Can you tell us about Kite?

It’s about a young girl who is recently bereaved after losing her Mother, who she loved very dearly. The girl now has to live with her grandmother who she doesn’t particularly get on with and so she decides to run away. To combat loneliness she makes and befriends a kite. It’s a simple story but with, we hope, many layers. The girl is desperate to get away from her current situation, her loneliness and sadness and grief. She wants to get away and go back home to her old life. The kite she befriends helps her learn to love her new home – London – by taking her on an adventure through the capital. She realises she has got a future beyond her Mother’s death, and a new family.

Where did you get the inspiration for the show?

We were initially inspired by indoor kites. They are a big thing in the US and in China where there are indoor kite competitions to power ballads in sports halls. We wanted to put an indoor kite into a theatre and see if we could make a kite a character. We were also inspired by stories like The Snowman and The Red Balloon that explore the power of the imagination, and the notion of a friend that is an inanimate object coming to life to help in a crisis.

The play began with a visual idea rather than a pre-existing story. What was your creative process from there?

We held a few periods of research and development where we took the kite into a theatre space and explored what story the kite lent itself to. Quite quickly it became clear to us that the kite was a benevolent Mary Poppins-type character, there to help. And so evolved our story about the kite helping a family experiencing bereavement. Once we had our story, we then undertook more research and development focusing on the physicality of our storytelling with our Movement Director Eddie Kay. Then followed the refining of the story, the design of the show, the making of puppets, and finding our cast of 4 multi-skilled performers. 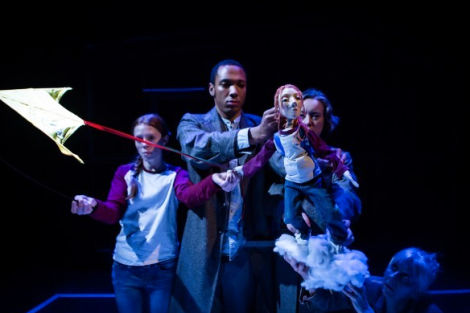 The play is entirely visual – when and why did you decide to make it wordless?

Kite was always dreamt up as a play without words. As visual theatre makers we wanted to set ourselves the challenge of storytelling with movement, music, puppetry and object manipulation. We are keen for our work to continue to reach broader audiences and making a show without words can, we hope, appeal to audiences who are deaf, deafened and hard of hearing, and audiences for whom English is not a first language.

The Wrong Crowd create theatre for old and young people to watch together. What is it about work for a cross-generational audience that is so important?

We don’t shy away from dark themes for our younger audiences, or from asking our older audiences to exercise their imaginations and sense of play. It’s important to us to provoke conversations on the way home and in the weeks after, between audiences of all ages, and to enable people to be transported into another world and across a threshold into powerful, moving and human stories.

Kite is really about losing someone you love, about how you deal with loss. Through a night out with a magical kite the girl discovers what she still has. Different people experience grief differently, and definitely at different speeds. Some people want to escape, and some want to bury it down and not talk. We see these different stages of grief from both the girl and grandma. Kite explores family and dealing with loss and realising how to help yourself through talking with the people who care.

We hope to tour Kite internationally in 2017, and are just starting to plan a new show for 2018 which we hope will be a new adaptation for a cross generational audience of a much loved kids book.