The Boy Who Never Grew Up never actually shows up in this production inspired by the classic tale. We’ve just missed him – our trip to Neverland clashes with his visit to the North Pole to ride polar bears. But we’re like the Darling children in the nursery, having just caught a flash of green through the window, or seen a tell-tale trail of leaves on the bedroom floor, or found an unattached, boy-shaped shadow dancing around the ceiling: the idea that Peter Pan has just been there is exciting, and makes it seem all the more likely that he exists.

Why not wait for Peter’s return? Well, Amelia’s (Amelia Bird) been behaving oddly. She’s reading the newspaper. Drinking lattes. Answering emails. Talking about tax returns. Kate (Kate Malyon) decides her friend needs a Neverland excursion, and stat. Together, they trace Peter’s footsteps, reliving some of his greatest adventures and having at least one of their own. 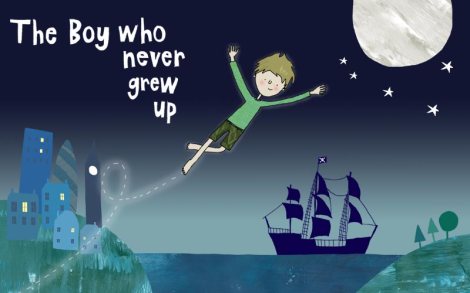 The show isn’t at all deferential to the original, taking the characters, places and stories we know and throwing them together with stuff we don’t. It’s a great, messy production that feels more like the childhood games that inspired J. M. Barrie than those experiences edited and captured for the stage. Though other adaptations may have impressive budgets and fancy flying effects, The Boy Who Never Grew Up brings audiences much closer to the action – our feet may not leave the ground, but our faces still feel the clouds in the sky and our bodies brush past jellyfish in the mermaid’s lagoon.