Physical actor and performance artist Alexander Luttley, and director Amy Draper, talk to us about their new show Princess Charming, coming up at Mini VAULT Festival.

Can you tell us a bit about Princess Charming, your upcoming scratch performance at Mini VAULT festival?

Amy: Princess Charming is a collaboration between myself as director and performers Alexander Luttley and Charlotte Worthing. It will be an interactive and playful exploration of gender identity and fluidity that will be aimed at children. Eventually, we hope to create a show that can reach all ages (from toddlers to teenagers and beyond), but at this first outing of the piece we will be concentrating on an age range of 6-10.

Alex: Princess Charming is an opportunity to discuss and explore gender with young audiences and their families through a piece of interactive and playful performance.

What has been your process for creating Princess Charming?

Amy: So far we’ve done a one-day workshop on ideas, had lots of creative meetings and met with a child psychologist. In the next two weeks we will run a couple of workshops with children in order to start talking to them about their perception of gender. Alex plans to lead one of these in drag, which should help to kickstart a conversation! Our devising/rehearsing period is just 5 days towards the end of the month.

Alex: Thus far it has been many conversations, personal experiences and a workshop with the team to explore the piece. I wrote my thesis on gender, which has provided much inspiration and research for the project to lead from. 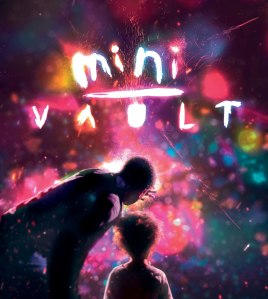 Why are you keen to make a piece about gender for this festival?

Amy: Mini VAULT is an exciting festival in that the programming covers a wide range of subject matters and approaches to creating work for young audiences. It seems like exactly the right place for this piece to gain exposure and feedback in order to help us progress to the next stage. Actually, originally we weren’t thinking about audience age, rather our interest in the subject matter and then when this opportunity came along we realized how important we felt it is to start these conversations early. We hope that the reaction at Mini VAULT will be generally positive and interested. Ultimately, this piece would need to travel further afield into schools and places where possibly a less liberal approach to gender may be expected.

Alex: As a festival, Vault and Mini VAULT both champion new, challenging and exploratory work which is perfect for us with Princess Charming at it’s current stage. It is a festival that encourages and allows for conversation between artist and audience that, for a subject matter such as this, is vital for further development.

There seems to be a trend developing for exploring gender in theatre for young audiences – what do you think sparked this? Why is now the right time for this conversation?

Amy: It is certainly right and positive that it is happening now, but it was probably right well before people decided to start talking about it! I’m also making a piece (currently for adults but who knows!) about transgender identity. When we started developing it three years ago it felt like quite an unusual subject matter on the mainstream theatre scene. Since then, there has been a definite shift – in society and the arts – towards giving more exposure to the trans experience. I’m not sure why that’s happened now particularly. Gender fluidity and personal gender identity vs expectations of gender still feels relevant and important to discuss.

Alex: With more focus and awareness in ‘mainstream’ society on the idea of ‘other’ in relation to gender, now is the perfect time to have this discussion with anyone. I have been involved in this conversation within the cabaret community for several years, creating work that discusses gender with adult cabaret audiences. It makes sense that the shift of target audience has widened to include young audiences, as with subject matters such as this, it is important to discuss these with those still in their formative years in order to explore an understanding and open approach in later life.

Some people still might suggest that subject matter like this isn’t suitable for a young age range, or that children might not understand it. What would you say to them?

Amy: We actually envisage that we will get more resistance to a piece like this from the parents rather than the children (watch this space!) Children may well understand this subject matter on a different level to adults, but that is also potentially a simpler, less prejudiced level. Gender identity is certainly complex, but at its heart I think the piece is promoting acceptance and ambiguity – and these are traits that children embrace before societal norms take hold. Ultimately, any “fear” of this piece comes down to deeply ingrained fear of the “other”. What we want to say, in hopefully a non-didactic way (!), is that the other is fine and to be embraced.

Alex: This opinion has arisen with regards to many subject matters relating to the ‘other’ – including race, religion, sexuality and biological sex. To suggest that children shouldn’t be presented with others is to regard these ‘others’ as abnormal, or unsuitable. My personal experience, is that the younger the audience that have come into contact with me, the more curiosity and acceptance. It’s parents that have reacted negatively towards gender ambiguity – their children simply wanted to ask ‘why’ and were content with the answer ‘because that’s how it is’.

What do you think you’ve done differently to make this a piece that both children and adults will get a lot from? Did you have any limits or boundaries in mind during the creative process?

Amy: Difficult to say at this stage -prior to devising it – what we’re doing differently… As I mentioned, this time round we’re trying to gear it towards 6-10 year olds but ultimately we’d like it to be cross-generational. The only limit I can envisage is not making overt reference to sexual relationships. When I create work for children I mainly concentrate on making a story clear and engaging as opposed to making it accessible for younger audiences. Subtle difference but important, I think, to start differentiating less between “children’s theatre” and “adult theatre”. Why not just theatre?

Alex: Obviously there are themes and factors that shouldn’t be overtly referred to. However, we are creating a piece of theatre that is on the subject of gender identity. We don’t want to patronise the children, nor do we want to decide what is and isn’t the case (as gender identity is so individual). Instead, we want to present a piece that people interpret, and that embraces in its creation and performance ‘other’ gender.

Are there any topics that you would like to see explored more in children’s theatre, and why?

Amy: I think any topic is up for grabs! I have two upcoming projects for children, one about British identity and one about bereavement. For me, I would mainly like to see a real shift in attitude towards children’s theatre and more artists making complex, exciting and risk-taking work that doesn’t patronise its audience.

Alex: Anything. There are some exciting projects on mental health I’m aware of, which I believe is incredibly important. Anything that promotes acceptance of those around you.

Is there anything you hope to get from the scratch performances? What will you be doing with Princess Charming next?

Amy: We hope to get a sense of what works and what doesn’t, and really just whether the idea has potential. We will be inviting lots of industry along to try and help us to the next stage. What happens next always depends on both creative and practical (read, financial!) considerations!

Alex: It would be incredible to get people interested in helping the project further, as well as feedback on how it inspires and captures audience’s imaginations.

The final question, that we ask everyone: why do you love children’s theatre?

Amy: As a director I love making work for children because they are the best audience. They react without inhibition and honestly and you have to really hone your storytelling skills in order to genuinely engage them. And when you succeed, it’s magic. It’s also exciting to play a role during such a formative part of their lives. There’s a responsibility to get it right.

Alex: As a child I was fortunate enough to have a family that took me often to the theatre, to see work that may be challenging for children. It opened my eyes and gave me an incredible basis of experience to approach the world with. To be a part of that which may do so for others is incredible.