February half term is synonymous with the Southbank Centre’s Imagine Children’s Festival, and this year’s programme looks to be a milestone event with Roald Dahl’s centenary celebrations at the heart of the activity. From Matilda’s giant handbag anchoring festivities in the Clore Ballroom, to bedtime stories on The Giant Storytelling Bed, to the fantabulous Wondercrump, you can’t help but be wowed by the imagined worlds of Road Dahl.

The festival is packed full of fun-filled events for kids of all ages. Taking over the Southbank Centre for twelve days only, visitors to the Imagine Children’s Festival will find a feast of delights waiting for them in a variety of forms: theatre, music concerts, story telling, interactive installations, workshops, dance and puppetry to name a few. And don’t forget the mini-festival makers from area primary schools who have played their part in programming the events and running activities on the day. This truly is a festival made for children. 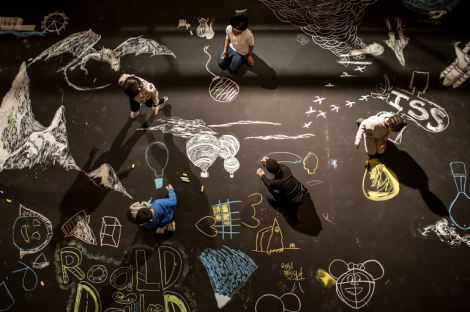 Special theatre highlights this year include Mr Tiger Goes Wild, a musical adventure based on the popular children’s book by Peter Brown (3+); a double bill of Roald Dahl’s Little Red Riding Hood and The Three Little Pigs like you’ve never experienced them before, with life-sized puppets from the award-winning Dutch puppet company Theater Gnaffel and live music from the Cambridge Philharmonic Orchestra (6+); and I Believe in Unicorns, an enchanting performance of Michael Morpurgo’s classic tale from theatre company Wizard Presents that captures the magic of storytelling in an interactive theatre experience complete with a giant bookswap (6+). This is the last ever performance for I Believe in Unicorns and a not to be missed event including a post show talk with Michael Morpurgo. And rounding off my theatre highlights are two Roald Dahl inspired events: a live reading of The Minpins by actor Richard Ayoade set to the music of Sibelius played by London Schools Symphony Orchestra and also the live readings and performances of Matilda from cast members of the award-winning Matilda the Musical.

The 2016 Imagine Children’s Festival runs from 10-21 February so wander down to the Southbank this February and let your imagination go wild. #SCImagineFest

Jenna is a writer, freelance arts manager and fundraiser. You can read more on her blog www.mrsbrownsbooks.blogspot.co.uk. Follow Jenna @mrsbrownsbooks