“Before you begin,” says Donne Buck, almost immediately after picking up the phone, “I just want to make it clear that this whole thing isn’t a big ego trip for me. All of it – the archive and all that – is about trying to give recognition to a child’s right to play, and to the duty of local and national government to make provision for it. It’s not about trying to get credit for me personally.” Given his self-effacing focus on children’s play over himself, it makes sense that Buck would be comfortable behind the camera.

Arriving from New Zealand in the 1950s, Buck needed a job. That’s how he ended up working at the very first ‘Adventure Playground’ in Hackney – essentially a converted bomb-site. Over six decades Buck captured images of the inner-city playgrounds he worked in, beginning with post-war play spaces, and this gradually evolved into an internationally significant collection of photographs now housed in the V&A Museum of Childhood archive. These images of children playing are the inspiration for a new children’s play – The Box of Photographs – opening at Polka Theatre on April 22nd. Not bad, considering an ever-modest Buck insists that photography is something he was “really never very good at”.

In keeping with Buck’s pictures, The Box of Photographs positions the spotlight on young people. Last year, Polka Theatre ran a competition for children aged 8-11, asking them to look at some of Buck’s photos and respond with a story. From the hundreds of entries, 21 stories were selected: patchwork pieces woven together by writer Daniel Jamieson to create an original script. The result is an action-packed adventure about a girl escaping to a world where imagination rules. 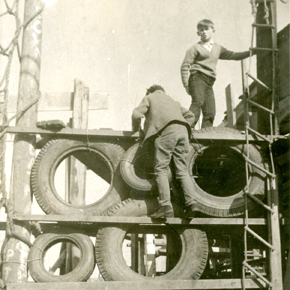 Buck had no idea about the production initially: “the whole thing was a surprise to me when I heard about it. I’m delighted, I’m amazed!” His excitement sparks as we discuss this new way of illuminating the political issue he is passionate about. At 81-years-old, Donne Buck has spent a lifetime campaigning for a child’s right to play, and he isn’t about to stop now. “Children will always play – they played in the death camps, now they play in refugee camps, they’ll play wherever they are – but it’s the quality of play that really affects whether it develops them to their full potential or not. That’s what people like me are engaged in – trying to make sure that children play, and when they play, they get the most out of it.”

That’s an increasingly difficult task – the combination of funding cuts and the government’s “ambivalent attitude” has led to a “rapid decline in services for children”. Looking back over the past few decades, Buck recounts governments’ failed attempts to support children’s play – inadequate committees appointing people with no background in play, insufficient funding and bad budget-handling, botched attempts at a Minister for Play position. As a result, Britain’s contribution to child development through play is “pathetic”, trailing behind countries like Scandinavia, Holland, Germany and elsewhere. To Buck this ambivalence betrays a worrying sentiment: “countries that recognize play actually like children – on the whole, government and public authorities don’t like children, especially in England.”

The battle for children’s play is also being fought closer to home. Buck formed and chaired the National Committee for the Safety of Children at Play, has campaigned for higher safety standards, and contributed to safety checklists and systems. But even he believes there’s now an exaggerated concern for children’s safety that is detrimental to their development – unable to go out unaccompanied, far fewer children are playing outside. Not to mention the stifling grip of assessment stalks them both in school and beyond: “The influence from regulations like that very, very definitely has an effect on the way children behave, because they realise they’re being inspected – it’s very sad, and it limits their play.” And of course we can’t forget the enormous impact of screen-based technology – “there’s no doubt at all that it severely affects brain development. I don’t think there are nearly enough protections offered to children when they’re allowed to use these really complex things as much as they like.” 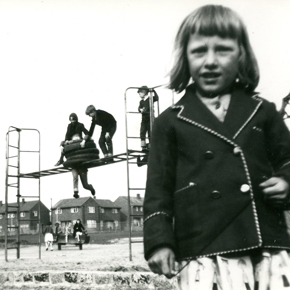 It’s a story not unfamiliar to children’s theatre. Cuts to arts funding, tightened purse strings leaving parents unable to buy tickets, the overwhelming impact of screen technology, Education ministers undermining arts subjects in favour of more ‘academic’ options, and schools with smaller budgets for trips, all threaten the sector. Theatre for young audiences is propped up by dedicated staff, generous volunteers, passion and goodwill, not unlike the campaign for children’s play – though support was pulled from organizations, playgrounds and resources, many continued to exist because people like Buck refused to give up. Like play, Buck strongly believes that “children’s theatre – and offering children opportunities to get involved in theatre – is very, very valuable.” The impulse behind The Box of Photographs and Donne Buck’s photographs is the same: they both celebrate children’s imagination, inventiveness, and creativity. The two coming together, then, makes perfect sense.

Did you ever imagine that your pictures would go on to have such huge cultural and historic value, to belong to a museum, to inspire a play? I ask. No, Buck replies, he is truly astonished. Demand for his photos started with the children featured in the images, who clamoured for copies to such an extent that he began producing prints to hand out. But he had no idea when he started taking pictures in the 1950s that they would be of interest to anyone but himself and his loved ones – having emigrated from New Zealand, he just wanted photos to send home to his family. He saved up to buy an old post-war camera from Portobello Market, initially using a neighbour’s attic to develop and print the photographs: “I was using cheap equipment and materials, and I had very little skill – I was learning as I went along.”

He remains reluctant to truly acknowledge everything he has achieved – our conversation ends in a typically humble fashion. Buck firmly reminds me that the archive also includes images donated by journalists and other photographers: “so some of the very best pictures are not my pictures at all, and I always acknowledge that.” So I’m fairly certain that when The Box of Photographs opens next week, Buck will be reluctant to take any credit – despite his pivotal role in its genesis.

The Box of Photographs is on at Polka Theatre 22nd April – 15th May for ages 7-11. For more information, and to book tickets, click here.

One response to ““Children’s theatre is very valuable”: Donne Buck and ‘The Box of Photographs’”