Septimus Bean and His Amazing Machine began life as a children’s book in 1979 by Janet Quin-Harkin. Adapted for the stage by Adam Peck, this Unicorn production sets out to bring a much-loved story to life. The success of the show is in its cleverly adapted ending that bridges the gaps between what’s on stage, what’s in our imagination and what’s happening in real life. Revealing the details would be a major spoiler alert, but it offers a well-crafted happy surprise, a welcome relief after a bit of a slow start.

Septimus Bean creates a procession of machines to present to the King and Queen though he has no idea what any of them are for. Looking more than a bit like Doc Brown from Back to the Future, Fionn Gil wonderfully captures Bean’s sense of dedication, commitment and complete hysteria when idea after idea fails him in front of the Royal Court. 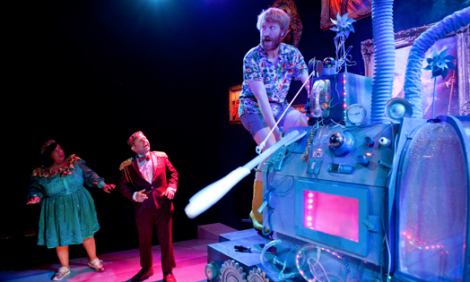 When Bean finally discovers what his machine is good for it’s a benefit to all. And by ‘all’ I mean even the audience too so leave a little extra playtime for after the show.

This production asks a lot of its audience in the first twenty minutes and I’m not convinced it delivers as much as it could. With a great cast and a brilliant story it seems some of the narrative conventions on stage could have been a bit tighter. Stick it out ’til the end though and a challenging start will be rewarded by an inventive conclusion.

Jenna is a writer, freelance arts manager and fundraiser. You can read more on her blog www.mrsbrownsbooks.blogspot.co.uk. Follow Jenna @mrsbrownsbooks