What an adventure! Our first camping trip last weekend was to the Just So Festival of theatre, arts and music for families. Despite a fair few downpours at the Rode Hall Estate in Cheshire, the spirits of hundreds of excited families could not be dampened. The theatrical escapism was present from the outset, before we had even seen a show; tribes were chosen (owls rule!), the most fanciful costumes and face painting were exhibited and the anticipation was palpable. With wellingtons on and with wristbands aloft we ventured through the famous suitcase archway. 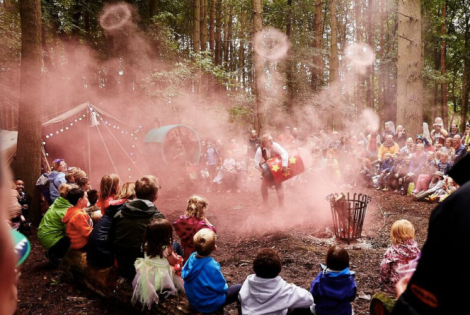 There’s a varied and diverse range of theatre productions at this festival played out in some very special settings. The Tales of Animalia was a collection of short plays performed by The Fabularium and for all ages. Deep in the forest where the stalls were tree stumps, this talented troupe were a firm favourite with my daughter. Through storytelling, song and intricate puppetry we enjoyed the tale of the mischievous ‘Reynard the Fox’ and delighted in the classic story of ‘The Boy Who Cried Wolf’. Fantastic energy and stunning headpieces brought these creatures to life in their own habitat. Over in the Spellbound Forest were a curious collection of experiences entitled Theatre For One by Horse and Bamboo Theatre. Through headphones and puppetry my daughter was thoroughly amused by the life of a hamburger in a proscenium arch mock-microwave stage! Through my audio aids, I escaped for four minutes into ‘Ancestry Poem’ by Julia Darling, designed for older children. This piece of shadow-style mini-theatre – in which silhouetted images were hand-spooled to tell the life-story of a woman’s body- was extremely sweet and thoughtful.

Back out in the main festival green, nine lucky children at a time were privy to The Peepshow presented by The Raree Man. Through the teacup-sized peepholes of an ornately decorated 18th-century style pull-along cart, was the most amazing and extraordinary miniature theatre complete with stage and trap door. Like a nonet of curious BFG’s, the children were transfixed by the most glorious puppet show of Jack and the Beanstalk, manipulated through a door at the side of the cart. The detail and love that had been poured into this piece was reflected back in the faces of the children and was a joy to watch. 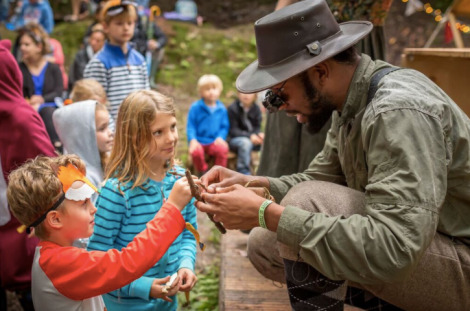 A gale began to blow when the fantastic Les Enfants Terribles took to the grassy stage on Saturday morning to the delight of a bustling audience. Their latest show was The Fantastic Flying Exploratory Laboratory: an exciting and extraordinary hot air balloon flying machine was suspended before us, the vessel at the centre of their quest to find the all-important elixir of life! This all-singing, all-dancing and genuinely funny show was unsurprisingly a real highlight.

My favourite performance was hosted by Kilter Theatre for children aged 10+. It was set in a caravan which had been transformed into Mobile Sorting Office 451 for The Last Post Play, and exclusive for only eighteen audience members per show. A place for undeliverables, lost post and lost people, Verity the post-mistress and a redundant post-master try to find what they have both been searching for. The intimate setting and outstanding performances were incredibly special. Our six-year old enjoyed it too and was encouraged after our rapturous applause to join the Friends for Pens real life penpal agency. She was enthralled. A very special theatre show. 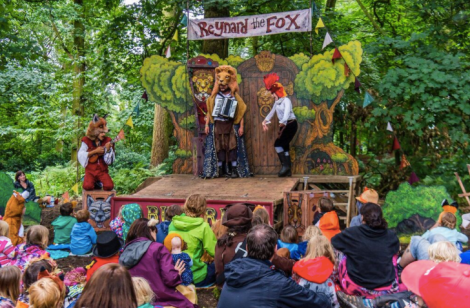 Other highlights of the festival were Sponge from Turned On Its Head, premiering at the festival and perfect for babies and young children, and also CLIFFHANGER by Bash Street Theatre, a real life silent movie! We also enjoyed Long, Broad and Sharpsight from Sharklegs Theatre, a funny, bold and physical show for ages 7-11.

When you combine theatre, camping, dressing up for the animal tribe and the vast array of exciting activities, what could once only be imagined is played out in reality. I love how Just So support such diverse creativity. A wonderful family arts festival with so much to indulge in.