Magical realism (a term used to describe much of Gabriel Garcia Marquez’s work) is an appropriate response to, and reflection of, a world full of implausible but increasingly normalised events. Inspired by Marquez’s 1955 short story, A Very Old Man with Enormous Wings was originally staged in 2011 but feels right at home in 2016 – the year the world would rather forget. This dark, frank, but ultimately hopeful production about a fantastical creature visiting a rural seaside town is very much grounded in our current reality, with allusions to Brexit, the recession, and the refugee crisis.

A plague of crabs has overtaken the village, a storm is raging, and a little boy is dying. The bad weather brings with it a mysterious winged man who cannot speak English but seems to cure the child and oust the crustaceans. Some see him as an angel, others as an aberration – either way, he’s an opportunity for financial gain. The very old man is quickly locked up and as news of his existence spreads, miracle-chasers and tourists flock from around the world to see him, bringing ill-deserved prosperity to the village.

A Very Old Man paints a troubling picture of human nature that increasingly feels like a mirror. Drawing parallels with the Daily Mail-style indictment of immigrants and the images of refugees reaching beaches across Europe, the villagers are immediately suspicious of the foreigner newly arrived on their shore and level a range of untruths at him as though they are fact (even the audience is warned to avert their gaze because of the supposed danger he presents). We watch as the type of tabloid news that feeds off sensationalism and click-bait consumption quickly brings in coach-loads of visitors, who leave just as fast once the next big thing (another miracle-maker somewhere else) is announced.

The villagers worship celebrity and become disillusioned with authority and the established order, ultimately acting in their own interests and believing what best serves them (Trump, anyone?). A supposedly religious community, they look to the local priest and higher officials to affirm the creature’s spiritual nature and deeply fear God’s wrath, all whilst treating the old man in the most un-Christian manner (throwing him into a chicken coop and feeding him old potato peelings). But is their hypocrisy and greed surprising, given the deep corruption at work in the Church – whose officials are, ironically, too busy or self-important to bother with a potentially holy happening? Or in a financial system which exploits and abuses the most vulnerable, just as the villagers take advantage of the very old man?

Kneehigh and Little Angel Theatre’s co-production is visually rich, with both ingenious puppets and props. The fates of the materialistic village are measured in satellite dishes which pop up around the playing space; increasing prosperity signals a more disconnected, self-involved community. With the economic boom comes a selfish banker so obsessed with money that he even consumes it (“I’ll eat it raw, sod the poor”), until inflation ends the party: the banker’s puppet body is a balloon which expands as he inhales banknotes, until the resulting fiscal bubble bursts. Possibly the most obvious visual metaphor is the very old man, who is briefly released from his cage in anticipation of the visit from an eminent religious official, and propped up Christ-like against the wall.

Inspired by (rather than adapted from) Marquez’s story, perhaps the biggest departure from the original piece is the role of the child. In the original tale, he copies the behaviour of his parents and neighbours, and treats the old man like a pet. In this production, however, his actions nicely fit the ‘magical child’ trope – he remains innocent and open-minded, the only villager who is kind to the old man and ultimately helps him. This element is a little sentimental, though provides an interesting contrast with the adults in the village, who almost lose their minds with all the fuss about the old man, so that the child is completely forgotten and unthought of. The adults make a mess, and the child is left to pick up the pieces – a more obvious warning to think about the world we are creating, and what our children will inherit. 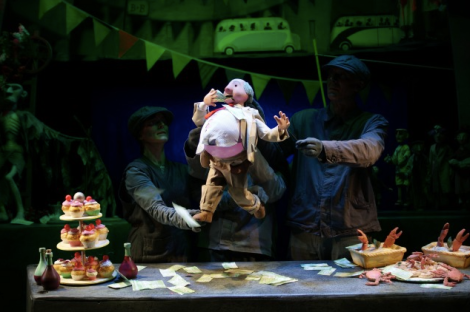 Gabriel Garcia Marquez’s magical realism reminds readers that “reality isn’t limited to the price of tomatoes and eggs“, that the weird and wonderful is everywhere if we open our eyes to it. In a play about an otherworldly man flying into an unsuspecting community, the truly magical moments are the acts of forgiveness and kindness shown when it seems impossible. A Very Old Man with Enormous Wings is a deeply critical reflection on modern life, but despite their narrow-minded actions, the villagers’ fate is better than they deserve. Remounting this excellent production comes at a critical moment: 2016 is the year we really began to reap what we have sown, but A Very Old Man is optimistic that it’s not too late.

One response to “A Very Old Man with Enormous Wings”