If you’re feeling a little un-Christmassy, you need this festive fix. If you’re already breaking out the Rudolph jumpers, you should also watch it. State of Play’s latest offering is required viewing, end of.

Tasked with making sure York’s Christmas cheer levels are at maximum capacity, elves Jingle (Danielle Winter) and Twinkle (Lane Paul Stewart) rush through the theatre foyer in a flurry of snow and twinkling lights. Armed with stories, a love of hot chocolate and a penchant for counting baubles, the team are here to tell tales and maybe receive a coveted phone call from the Big Man in Red himself. There’s only one problem: rogue elf Frank cuts their storytelling short by making off with the sacks of letters to Santa, sweeping everybody up in a race against time to retrieve the mail. 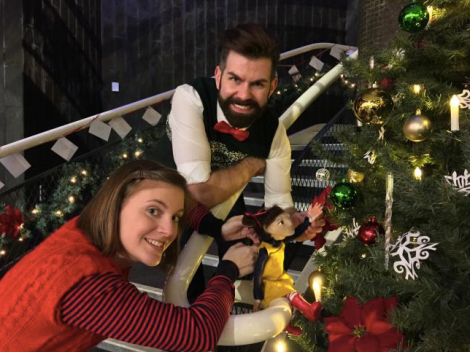 A promenade performance winding through the theatre’s front of house might seem daunting whilst engaging a large group of small children, but Winter and Stewart make it look like a walk in the park. Their elves are every ounce charming and cheerful without feeling like the performance is forced, and it’s clear that their sincere enthusiasm wins over the parents too. Winter in particular handles the more boisterous of “adventurers” well, maintaining a steady pace whilst keeping the excitement of the trail alive for all participants.

Director Lizzie Wiggs has thoughtfully crafted a route through the theatre which transforms the foyers into letter trails and sites of crashed elf cars. The details are simple but effective: Winter and Stewart have a transformative power over the show that causes the strings and magnets to become invisible as we watch envelopes fly overhead.

We see the same degree of thought and care put into the beautiful set of drawers the elves bring with them: a cute organised chaos of old suitcases and wrapping paper which holds that same magical spatial quality as Mary Poppins’s bag. As an assortment of items are uncovered from within, each reveal has a surprise element to it – a delightful quirk that keeps the audience guessing.

There’s a slight hiccup in the show’s narrative: we never find out whether character Sophie (from a story Jingle is telling) is reunited with her teddy. It’s a shame because the rest of the show is so endearing, to the extent that I didn’t realise this segment had been left incomplete until I returned home and was recounting it. However, what the show lacks in plot resolution the actors more than make up for in oodles of festive glee. At 45 minutes, this is the perfect length to let children become comfortable with the performers and solve a mystery, all before a calming letter-writing session at the end. It’s enough to make you wish you could write a letter to Santa as well, commending these two elves for a promotion.

Louise Jones likes writing plays with big musical numbers at the end and is part of a family-friendly improv troupe heading to the Great Yorkshire Fringe and Edinburgh Festival Fringe this summer. You can find links to more of her reviews on her portfolio or by following @lweez_j.