This Christmas Oily Cart have remounted In A Pickle, their production for 3-5 year olds inspired by Shakespeare’s The Winter’s Tale. Though originally commissioned by the RSC and performed as part of the World Shakespeare Festival in 2012, this is a reworked version including an updated script, some costume and set revisions, and a change in live instrumental accompaniment to electric sitar. The production’s key features, however, remain – we are given a sheep’s-eye-view of the story, as the audience don fluffy ears and join the Shepherdess’s flock for an immersive, multi-sensory theatrical experience. 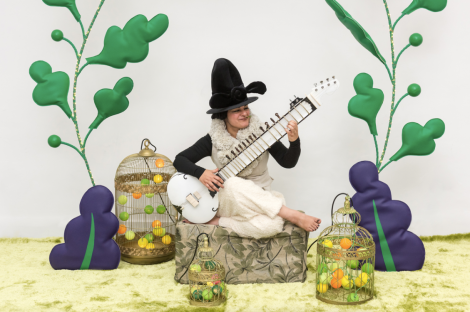 The simplified narrative sees the Shepherdess Baabara and her sheep find a lost baby, and return it to her parents: the King who is mad with grief, and the Queen who has (supposedly) died from heartbreak. Though not much of the original play remains, Oily Cart’s version brings Shakespeare to life, with the audience engaging as collaborators and interacting with characters; guiding the action as they suggest ways to soothe and look after the newly-found infant; and feeling, hearing and smelling the universe that the story inhabits. Shakespeare’s verse is gently introduced through song, and a dreamy number about flowers, herbs and plants performed as they are passed around to be crushed and smelt transports us to the world of Shakespeare’s, and the audiences’, imagination. As the quest to find the baby’s parents intensifies, the script shifts to include more spoken passages taken directly from Shakespeare’s work.

Much like last year’s Land of Lights, the audience sit along two rows of tables which transform as landscapes change. Initially covered in soft grass, troughs of water filled with shells and seaweed are revealed as we move from green pastures to sailing across the sea, only to be replaced with grand tablecloths and a banquet feast as we arrive at the castle. Claire de Loon’s set and costume designs are sumptuous, and cleverly weave in Tudor influences – the sheep wear wool-covered waistcoasts and huge pantaloons that really do minimise in size when sheared, and the King and Queen wear cloaks and crowns made from vegetation, covered with great bundles of grapes, leaves, and even a shining orange (confirming that the lost baby, whose head seems to be a turnip, could only be theirs). 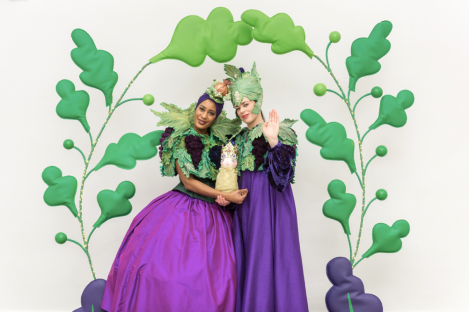 As with all Oily Cart productions, the audience are met in the foyer by a character and from there gradually immersed into the show. With In A Pickle, this initially involves assembling in a specially dedicated area within artsdepot’s auditorium to chat with the sheep and shepherdess, put on the sheep’s ears and play some initial games, before moving into the main playing space. This is an invaluable part of the production which introduces Oily Cart’s approach to theatre-audience dynamic and, as Hattie Pierce writes in her A Younger Theatre review, “free[s] the children from the strange formalities of conventional theatre”, but it’s also a bit of a tight squeeze. The main performance area is similarly cosy, with some poor sight lines for accompanying adults sitting further back. Still, this is venue-dependent and should have little impact on the young audience members the production targets.

Reading through reviews of performances from a few years ago, many of the critics’ conclusions still hold true – that though Shakespeare for the very young might seem an impossible challenge, it is skilfully met and mastered by Oily Cart in what continues to be a rich, gorgeous production.