Breaking news…the affluent and gregarious hippo, Hercules Waldorf Franklin the Third, is on a mission. A mission to the moon! His rocket will be magnificent (he’s spent a trillion hippo dollars on it after all) and he’ll go where no hippo has gone before… 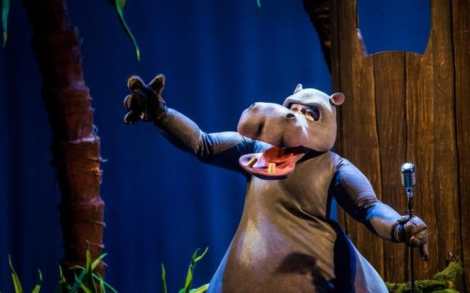 Franklin has the posturing of a superhero and the ego of a world leader. Watch out moon, he’s on his way…! Meanwhile, back in the swamp another hippo is appalled and enraged. Sheila went to hippo school with Hercules and claims that he stole her supersonic vision: to be the first hippo on the moon. She doesn’t have hippo dollars but does have a trusted band of jungle friends and between them they hatch a plan to get Sheila into space. It’s time to set your sights high Sheila – but who will eclipse the other? Who will be the first hippo on the moon? Let the space race begin!

This stage adaptation of David Walliams’ book uses a beautifully crafted, if fairly sparse, set, which is weaved through by the strong cast of talented performing puppeteers who deftly manipulate the bright, funny and comic puppets as the antics of Sheila and her forest friends unfolds. There are a few moments when the movement of the set is a little distracting – at times it would be great to just hear Walliams’ fantastic story and watch the engaging animals interact – but this is a short lived, minimal gripe and the focus is swiftly regained.

There are energetic musical numbers and, as I’ve come to expect from any associate of Les Enfants Terribles (Les Petits is their sister company), lots of laughs and joyous ingenuity. Particular highlights are the Pathé style news announcements and of course Sheila’s hippo bodysuit, a comic joy to behold! The guidance suggests the show is suitable for ages 3+, but my seven year old daughter really enjoyed it. The First Hippo On The Moon is a lovely and ludicrous live adventure, reminding children to dream big and never give up. 3…2…1… Blast Off!