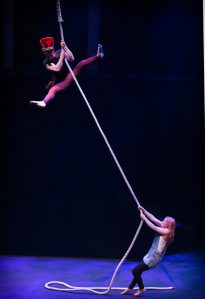 A suspended white rope, a moon-like hoop, and a backdrop of twinkling lightbulbs provide a simple but entrancing setting for children’s circus company Hikapee’s Moonfall.  This delightful production fuses acrobatics, playful humour and child-like wonder to explore what it would be like to live on the moon.

Moonfall is a two-hander: Bryony Livesey plays an unnamed Princess who is instantly relatable due to her strong-willed and  tomboyish nature. Alongside the Princess, Edd Casey convincingly transforms into an array of characters from a trumpet-wielding soldier, to her squabbling companion, and a pantomime dame-style matron.

Given that Moonfall is a non-verbal production, it is particularly impressive how well the pairs’ physicality slickly conveys their characters and the narrative so clearly. This was perhaps most evident when they were using the apparatus. As the Matron, for instance, Casey clambered up the rope with his legs splayed in a hyperbolically comical fashion, whereas when he was playing a young boy, he scampered up the rope in a much more playful and light-footed manner.

Moonfall intertwines everyday activities, such as reluctantly having your hair brushed or being forced to wear a frilly dress, with impressive and awe-worthy circus vocabulary and acrobatics. There were many audible gasps and cheers from the captivated young audience, as the duo seamlessly tumbled from one trick into the next. 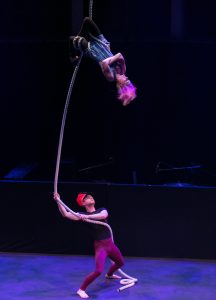 Finn Anderson’s score is beautifully hypnotic and provides an almost cinematic quality to the piece. It is the perfect soundtrack to accompany the highs and lows of this intergalactic adventure.

At present Moonfall is a work in progress, and what Hikapee have managed to put together in just three weeks is a very polished and majestic piece of theatre. At sixty minutes it did however feel a little long, and could do with tightening in some parts. For a work that is aimed at ages 4 + it is unsurprising that some of the young audience did start to get a little fidgety and restless towards the end.

That said, Moonfall is the perfect introduction to circus: it has some beautiful moments, a stunning score and plenty of fuel for your imagination. Plus, if you have ever wanted to live on the moon, Hipakee’s Moonfall will show you that even the most far flung dreams really can come true.

Ruby currently works for artsdepot as their Digital Marketing Officer. In her spare time she can often be found in a theatre, soaking up the cultural metropolis that is London, or eating tapas. To read some of her other reviews check out her blog or follow her on Twitter @RubyIsla_CM