Dogs Don’t Do Ballet is Billy Elliot for 2-7 year olds, with all of the dancing and defying stereotypes, but without the miner’s strike or Julie Walters. Like Billy the boy, Biff the dog loves ballet – he doesn’t want to fetch sticks or wee on lampposts, but instead ‘likes music, moonlight and walking on his tiptoes’. Owner Anna is the only person to encourage Biff’s passion: everyone else is perturbed by a dog that would rather perfect an arabesque than chase a cat. But when disaster strikes the prima ballerina at the Royal Ballet, it doesn’t matter who thinks dogs don’t do ballet – sometimes they just have to! 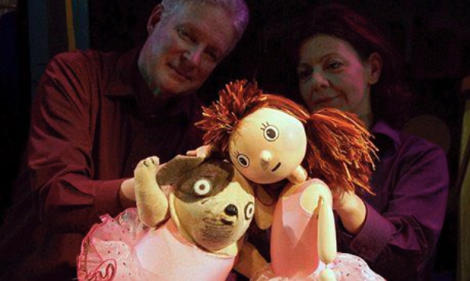 Based on the picturebook by author Anna Kemp and illustrator Sara Ogilvie, it was adapted by performer Andrea Sadler and the theatre’s Head of Production, David Duffy. This perhaps goes some way to explain the show’s technically-creative ingenuity, which sees a birthday spread complete with plates of sausages and pink wafers become a bus that drives away, and the theatre usher’s ice cream tray transform into an orchestra pit, with all its lollies turning into instruments. The leap (or jeté, as we’re talking ballet) from page to stage is a particularly enjoyable one, as we watch the inventive solutions found to tell this story with puppets.

Ronnie Le Drew and Andrea Sadler, both with a sizeable list of Little Angel credits, manage the cast of very impressive puppets designed by Keith Frederick. Biff, a portly canine who looks a bit like a battered teddy bear, hilariously turns up his little nose with each plié and pirouette; the row of dancers in Anna’s ballet class practice their poses and point their toes with incredibly fluid, convincing movement. Le Drew and Sadler also make an amusing double-act as the vivacious and glamorous dance teacher Miss Polly and her shy and put-upon assistant Marjory. Their initial opening skit, though slightly confusing, doubles as a quick dance class – anyone leaving the play should know first to fifth position – and their subsequent interjections into the action are some of the funniest moments in the production.

Dogs Don’t Do Ballet was originally staged at Little Angel in 2012, but due to huge success it has played and toured in the years since, with these latest performances another much anticipated revival. The production is imaginatively crafted and hilariously executed, so it’s easy to understand the ongoing appetite for this choreography-obsessed canine: Dogs Don’t Do Ballet could – and probably should – continue to run for many years more.