Everything about this production is beautiful. The stage is simple and elegant in dark pink and teal. The buttons, buckles, crowns and wigs are crafted from sheets of foam so that we are sitting in a picturebook. Even simple props are artfully and stylishly crafted from card and paper: a broom used by a snooty footman seems to be a cartoon drawing made flesh. 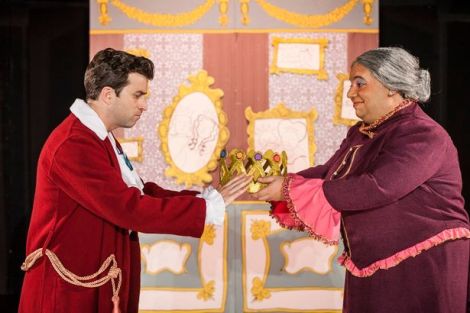 The play itself consists of a series of variously humorous and magical ‘bits’: Each foreign ambassador is spied through a telescope, floating above the viewer as they arrive in a carriage, a train, a boat. The Queen and the Prince have a tussle over the crown, though not to keep it. There are dance sequences ranging from the jaunty to the aggressive, and culminating in a piece that was so touching it made the person next to me cry.

It must be said, though, that the show still needs quite a bit of work in terms of the pacing and the plot. The individual pieces within the play are all lovely, but there are a lot of them. This feels like a production which hasn’t quite decided what it wants to be, or who it wants to talk to.

To begin with, it’s slow to get going. Such gorgeous design made it more manageable, but there was muttering among the audience after the first 10 minutes of footmen carrying in portrait after portrait of (stylistically rendered) kings and queens to line the walls. When the dowager Queen finally appears, cutting a magnificent figure in a grey foam wig like a magnanimous Trunchbull, she proceeds to greet her people for so long it’s almost democratic. 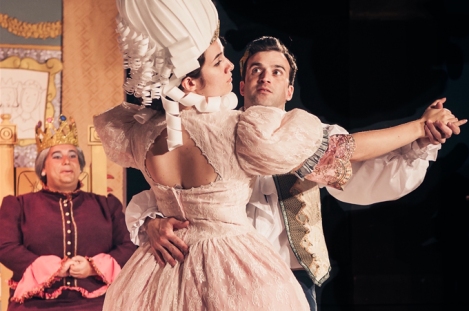 The ‘bit’ is that she is falling asleep a lot. I actually didn’t realise that she wasn’t just bored by the drudgery of public office, so my companion had to explain she was actually tired of ruling. This made more sense of the attempt she then makes to get her son, the reluctant Prince (crown askew, and giving his people an ebullient thumbs-up, much to the chagrin of our queenly Queen) to take over the family business.

And this is the question I kept returning to: who is this for? I’m not a genius, but if I can’t see that the sleepy Queen is a plot point, not just a gag, then how can an audience of 5+ year olds? Is this intended to be classic fairy tale, a simple story that will look beautiful and entertain little ones, or is this something that is designed to make slightly older children think? At the moment it seems so confused that the only people who seemed really able to appreciate it were the parents.

When he finally agrees to take over the kingdom, the Prince is required to marry. Enter a parade of women, two rather too aggressive, one fun to dance with but not someone our Prince wants to kiss. The final princess is clumsy and sweet, but the Prince only had eyes for the brother who brought her. The two princes spend some time playing and having fun, and finally the sister returns as a bishop to marry them.*

The little kids at the front loved the spectacle, the dancing and funny faces, but they got restless with the elaborate set up. I genuinely struggled to believe that they would be able to follow a story with so many additional ‘bits’ and pieces. If this is for them then the story is just a fairy tale like any other, and needs to be simple like a fairy tale: The Prince is given the crown provided he marries. He meets some amusingly unsuitable candidates and finally chooses someone he can have fun with! They marry. The end. Then all the funny footmen and telescopes and talking pictures (oh and the pictures sort of mutter, by the way – there really is a lot going on) can be brief amusing asides.

If this is something a little more sophisticated, something surprising that the slightly older children can see as a charming challenge to the stories they already know, then it also needs to be clear what it is about fairy tales that is being challenged. When the princes meet, they play. Their play is childish and sweet: pretending planes, horsies and going fishing. It made me wonder – should we see them as children? Is he too young to marry (a common fairy tale crime)?

All the other prospective spouses just danced and wanted kisses, whereas when he meets the Other Prince, they have the chance to spend time together and share interests. Are we supposed to think of this prince as just needing a best mate to do ‘boy things’ with? Or if you think love and marriage at first sight is a problem in fairy tales, then make sure all the prospective partners have the same chance to get to know your protagonist.

If the social expectations framed in the elaborately delivered portraits in the background are the hetero-norm you want to challenge, then there needs to be a model which shows that the final choice is a person with whom he has a unique connection: all of the princesses being accompanied by male chaperones, for example, and the Prince is ambivalent about each of them until he meets this Other Prince. Choosing a man can still be a twist, but show me that love isn’t just a case of the correct gender popping up.

There is clearly a lot of love and a lot to love in this production. There’s a lot full stop. Theatre has the great advantage of being able to adapt, hone, tighten and change with each audience it encounters. Although this play isn’t perfect, the joy of a show like this, where the design and the actors are at such a high standard, is that I am sure that every performance will be well worth attending.

Charlotte Fleming is a blogger, proofreader and editor, and Managing Director of I Read Your Writing. Charlotte is cisgender female and writes from her experience as such, but would welcome comments from anyone else who have seen the show. Follow Charlotte at @ReadYourWriting