Falling Dreams is like an existentialist, emo Alice in Wonderland – a young girl falls down the sink hole of pubescent turmoil, rather than the rabbit hole, and finds herself less longing for home than locking horns with her hormones. As in Lewis Carroll’s tale, Falling Dreams becomes curiouser and curiouser: there’s no Mad Hatter asking riddles about ravens and writing desks, but there is a man-sized talking crow dispensing incomprehensible advice. It’s trippy, for sure, and in the best way. “The storm is in me and I don’t know what to do,”, the young girl says, and the audience rides the storm with her. 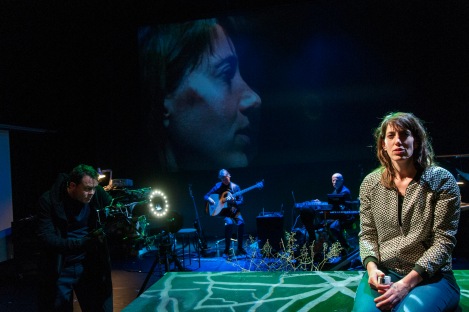 Unlike Alice, the protagonist is an old soul, mentioning more than once how she is in fact 100 years old, not 12. An introspective over-thinker, she appears closer to the level of Wittgenstein than Where’s Wally. When in the throes of her fledgling philosophical funk, she doesn’t appreciate the intrusions of banality which come from her parents: “Do you have your gym bag?”, they ask, puncturing her pondering into the metaphysics of time. The whole show is a remarkably well-tuned representation of youthful angst, and the girl’s shifting dynamic with her parents is one aspect of this; she wonders whether they might have preferred her when she was younger – before the “mood-swings” her mum complains about – and later realises that she no longer wishes to tell them everything she’s thinking.

Like Make Mend Do’s productions, the different elements of each scene are filmed across the space – the girl might be performing stage left, whilst her background is being captured stage right –  and projected onto the screen above. In Falling Dreams, the camerawork and projection play an integral role in communicating the girl’s experience. The dual appearance of the character on stage and on screen gives insight into her emerging self-consciousness: as she develops an awareness of her identity she imagines how it appears from the outside as well as experiencing it from within. It also offers the audience both the girl’s and an outsider’s perspective of her actions: you can see the internal workings of her mind, and the wonder and muddle etched on her face, but you can also see her body flailing around comically, a close-up of her face gurning hysterically, as she descends inside the sink hole. This seems to capture the reality for many young people living through similar mental tumult – what is experienced as agonising and bewildering chaos can appear as amusingly melodramatic melancholy to outsiders (especially parents).

Much of the play’s humour comes from seeing how each shot is made: on the screen we see the girl riding a bike, her hair blowing in the breeze, whereas on stage we have just witnessed the actor madly grab for the prop handlebars, while another performer frantically flaps a piece of cardboard at her face in lieu of the wind. The choreography involved in setting up and capturing each scene is impressive, requiring everyone on stage to take on multiple roles, but is also quite a manic process, which again is both funny but also speaks of the general confusion and chaos that the girl is feeling. 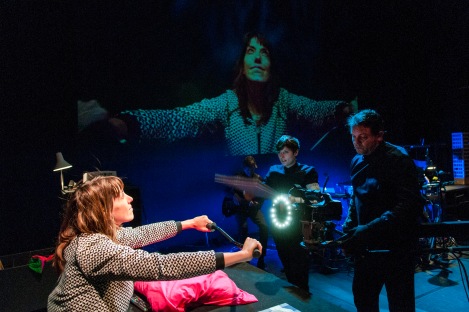 The performance contains a smorgasbord of wonderfully zany segments, and there is one in particular which stands out: a trouser-less man enthusiastically delivers a presentation about how beneficial it can be for companies to monitor their employees’ every thought and emotion. (Anyone who has read The Happiness Industry will recognise its depressing plausibility.) It is a small nugget of well-targeted social satire, humorously critiquing the tendency in big business to instrumentalise emotion for productivity and profit, and it is particularly effective in its juxtaposition to the untameable emotions experienced by the main character. When the man realises he’s in his undies, it becomes clear that he is dreaming, and this sets off another train of philosophising in the girl: is he in her dream, or she in his? In another memorable moment, two hand-puppets take on the roles of functionaries in her brain, sifting through memories and deciding which will stick (the compliments are quick to go, whereas the insults are sent straight to her synapses). The muppets represent the neurological processes underlying her emotional disarray and affecting her neurons and transmitters, just as significant and impactful as any bodily changes (“I want to get out of my head!” the girl insists).

Peppered throughout the production are songs accompanied by live musicians (Falling Dreams can be described as gig-theatre akin to The Broke’N’Beat Collective), continuing the long tradition both in life and in art of young people using music as a way of expressing and exploring their emotions.

Falling Dreams is a dizzying, richly detailed examination of a tweenaged mind. Its moments of whimsy are all the more effective because it is so evident that the makers have taken their investigation seriously: there is no simplistic, sentimental gloop in this coming-of-age tale (especially refreshing when the protagonist is female), and it could not be less condescending.