The Wind in the Willows should finish at the end of the first half. The blundering, selfish, spoilt Toad would stay in prison, rather than evading jail time because, as a rich aristocrat, he just doesn’t ‘belong’ behind bars. Instead, the whole second act is a succession of animals making excuses for Toad’s hooliganism, finding his disregard for the law and society charming, his destructive obsession with expensive toys loveable, and his piles of inherited cash proof that he’s somehow a better breed of person. If one were to take issue, say, with the way he conducted himself in the dock, responding to the judge’s simple questions with bumbling, inarticulate, unrelated ramblings, you can bet that Badger, Mole and the rest of his friends would scream back, “Well, he may not have known all the answers, but what about Dianne Abbott on LBC last month?” I left quite quickly at the show’s close last night, but I imagine if I had stayed a little longer, I would have seen the riverbank gang vote him in as Mayor because he’s such a laugh. 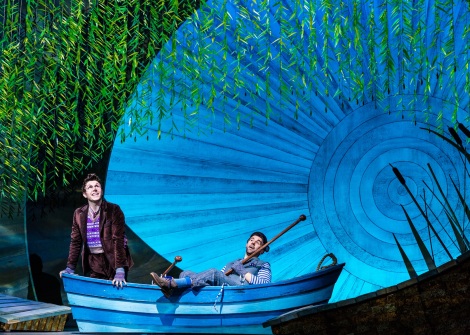 Toad, with his plummy accent and stately home, is the hero of The Wind in the Willows. His middleclass mates, dressed in tweed jackets and knitted golf jumpers, save him. “Save him from who?” you might ask. Well, the villains are weasels and stoats – cockney Del Boy/gangster types, with tattoos and hoop earrings. For every time you see Toad offer his companions lobster and pate, you see the weasels shovelling popcorn and fizzy drinks into their mouths. Obviously aware of the awkward visuals, there are a couple of foxes included in the villainous mob, dressed up (bizarrely) in fox hunting gear, so that the battle doesn’t appear quite so divided down class lines. But when it really matters – when the two opposing sides in this story are seen most clearly, as in the court room scene – the foxes are nowhere to be found: it’s the countryside club of Mole, Otter and the others vs the commoners, the weasels and stoats.

Their villainy, it appears, is socialism. Chief Weasel (the show-stealing Neil McDermott) refers to his companions as comrades. He reminds them that all property is theft, rallying them to “steal Toad Hall back”; Ratty jokes that the weasels “don’t believe in private property”. Some might argue that what they go on to do – purloin Toad Hall – is wrong (others might say that they are merely acquiring a large property that has been left empty, which is the real crime…) Whatever. The weasels and stoats are punished for their theft and Toad, who steals a car, ultimately gets away with it because he knows the right people and because everyone finds it hilarious that he can’t get through a sentence without shouting “Poop poop”.

Again, it’s worth saying that the creators of this latest adaptation do seem to realise it’s all a bit problematic, and the weasels are made to commit the additional crime of kidnapping Mrs Otter’s daughter and fattening her up to be their food. But even before that happens, the weasels et al are belittled because of their station in life. When the jury of weasels, stoats and hedgehogs who have been victimized by Toad’s reckless behaviour find him guilty and celebrate his sentence, their judgement is undermined – apparently, their vote is just to “get their own back” (because they’re what, jealous they’re not rich?) rather than due to the fact that Toad is (as he says himself!) guilty. Even the judge is mocked (and where have we seen that before). The lesson of The Wind in the Willows is not that “what we have in common is the part that matters most” (though the production so clearly wants this oft-repeated refrain to be its moral). It’s that two people can commit similar crimes, and the posh, rich one will escape blame.

Yeah, yeah, yeah, it’s just family theatre. It’s just a West End show. It’s just a musical, light entertainment, harmless fun, don’t take it so seriously. Except that producing and programming is political – what you choose to make and fund and support reflects what you think audiences want to see, what you think is relevant, or worthwhile, or well-loved, or potentially lucrative, or acceptable to a mass-market of families. Of all the many, many times that these Edwardian children’s books have been dusted off and thrown onto the stage in the past few years, surely this latest outing will mark the turning-point when they begin to make those in the auditorium feel uncomfortable rather than cosy. This isn’t 1908, when the book was first published. This isn’t the Tudor times – that’s right, The Wind in the Willows is based on the Tudor’s ‘Great Chain of Being’, a belief in the world’s hierarchical structure as decreed by God, which gives order to the world by ensuring that everyone knows their place. This is 2017, and an auditorium cheering for Toad and his mates is on the wrong side of history.

Julian Fellowes is, of course, the king of sugar-coating the olden days, so he is a perfect fit for what is essentially an exercise in nostalgia (don’t tell me it’s the kids begging their parents to buy tickets). However, in writing the book, Fellowes hasn’t contributed a huge amount – barely a couple of sentences are exchanged before the next song comes along. The music and lyrics are by Stiles and Drewe, the multi award-winning musical theatre writing partnership who created the smash stage version of Disney’s Mary Poppins. The music is good, particularly the beautiful wassailing song of some little mice, as are the lyrics, particularly the lines “All though we’re armed with many prickles/ they’re no match for large vehicles” sung by hedgehogs struggling to cross the road. The huge cast are hugely talented, from the show’s charismatic lead Rufus Hound as Toad, to chorus member Natalie Woods, who takes a memorable turn as a tap-dancing horse.

Peter McKintosh’s set design is simple, spare and elegant, with circles the central feature: appropriate as we cycle through the seasons (and as Badger issues his grim reminder that the “story of life” is “the wheel turns and grinds us all to death in the end”.) There’s even a rotating stage, which showcases Toad’s increasingly impressive purchases – a boat, a wooden caravan, a motor car (built before our eyes) – as well as his getaway vehicles – a barge, and a massive steam train the width of the stage – though not his final, more unorthodox mode of transport… McKintosh also designed the costumes, which include swallows decked out in glamorous air-hostess outfits, and hedgehogs that look like a prickly pack of boy scouts. If it wasn’t The Wind in the Willows, I could have liked this show.

I can’t completely let the creative team off the hook, though. For all their attempts to make the production a bit more PC, it was their choice to cast the villains as Cockney wheeler-dealers, and to dress them up as they have. They seem as conflicted as Ratty is – he knows that Toad’s a pampered, childish, egotist who doesn’t give a hoot about anyone unless they’re doing him a favour, and deserves everything he gets, but Ratty is eventually persuaded to assume Badger’s foolish optimism about Toad’s potential, and to share dopey Mole’s star-struck loyalty. It was their choice to re-stage this – let’s be honest – old-fashioned, out-of-touch story. And so the producers pushed forward with a show that actually calls to mind the housing crisis, the growing inequality, the class divide, the tabloid papers who run hysterical headlines about commies “seizing” properties, rather than giving audiences a couple of hours’ respite from the news (I can hear the shouts of ‘snowflake’ through the computer screen). No one could have predicted the events of the last few weeks when they made and scheduled The Wind in the Willows, but anyone who has read the book can see it’s ill-fitted for life in Corbyn-crazy, Brexit-broken Britain.

One response to “The Wind in the Willows”