Well-known and loved for their family friendly theatre, the 45-year-old company London Bubble will be staging Tales From The Arabian Nights outside in Southwark Park and Greenwich Park this August. We talked to Artistic Director Jonathan Petherbridge to find out more about the company and its summer show…

After a seven year absence, London Bubble is staging Tales From The Arabian Nights this August in Southwark Park and Greenwich Park. What can audiences expect from the show?

The show takes the form of a journey. Each park usefully has a bandstand  where the audience and storytellers and musicians meet. Then we set off on a sort of expedition and we take with us all the things we need to tell the stories: props, costumes, instruments, torches, rugs (for children) and fold up chairs for adults, and we visit 7 locations as it slowly gets dark. We’ve got a great cast of 7 performers who tell the story of the Princess and the He-Goat, Khalifa the Fisherman, The Lie, The Woman and the Djinn, all bound together with a frame story, which you may know – Shaharazade, the woman who saved the lives of many other women using the power of stories. 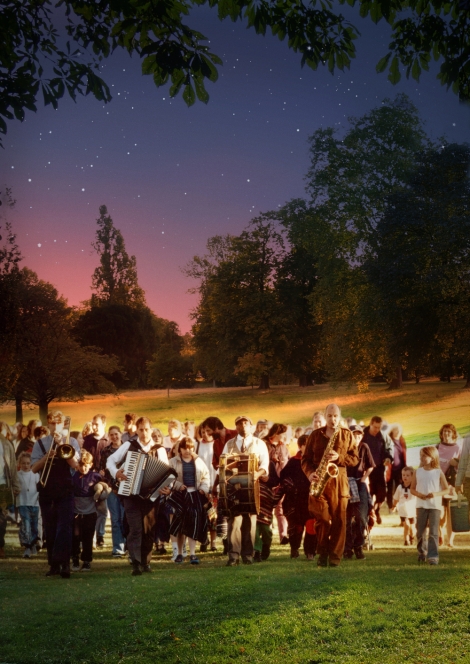 Tales From The Arabian Nights was the company’s first promenade production, back in 1994. Why did you want to restage it now? Is there anything different about this production?

Many people who became fans of our promenade shows didn’t see this one – and it’s one of the most spellbinding. Although it’s a new adaptation with a tone that speaks to modern audiences, it contains the same stories. At its centre is the power of the shared story – told live and really drawing in the listeners. The stories were told across the trading routes running from East Asia to North Africa – they were told live in market places and coffee shops. Storytellers were employed for their skills by the traders to attract a crowd. Sometimes, like Shaharazade they broke off for the day without revealing the outcome of the story – so customers would return. This shared storytelling is the essence of Bubble theatre. The journey through the parks is our version of travelling the silk route.

London Bubble has existed for 45 years – what is the secret of your longevity?

We try to work with our community – to make theatre that is relevant to what is happening, to get people to help, to suggest ideas or join in with the making of the theatre. Bubble has always done this so it has evolved according to what is required – and I like to think it’s been an early adopter. We pioneered Forum Theatre, we were one of the first companies to present Promenade Theatre, currently we are developing and articulating how making theatre effects your wellbeing – your sense of connection and your sense of self-confidence. I wonder what the company will be working on in 20 years time?

This is the first ticketed summer production since 2010. For audiences new to your work, how would you describe London Bubble’s ethos?

Oh, this is getting quite heavy now. We use the phrase People Make Theatre. It might sound obvious but sometimes people associate the word ‘theatre’ with a building, or a stage. But at its essence, theatre is people. It’s about people attending to other people sharing something. And it’s a loop. All our work is about that. It requires generosity, wit, listening (both from the player and the attendee), bravery, care, playfulness and imagination. We facilitate over 1,500 sessions each year – small sessions with between 10 and 30 people in the room. But in each there is a moment where those properties are in play – it creates connection, wellbeing and community. A larger scale ticketed production such as Arabian Nights, requires exactly the same skills and will result in exactly that same sense of shared community.

London Bubble seem to run other projects and productions throughout the year – could you tell us a bit about your work?

Making a show like this is quite unusual at the moment – we run an ambitious participatory programme, Speech Bubbles, in over 40 primary schools; a project for Young Theatre Makers who create a forum theatre piece after talking to other young people; the Creative Elders Programme which involves about 100 older people around our area. We also produce intergenerational projects which I’ll talk about in a minute. Speech Bubbles is delivered within Primary Schools and works with children who are referred to the programme by their teachers as they may be struggling to communicate in the classroom and playground. It’s a big programme and is currently undergoing a sophisticated impact assessment (our dream is that it is available in every primary school in the UK). We run an ongoing programme for Young Theatre Makers who have ‘time during the day’. Two groups a year work with us for 4 months learning facilitation, devising and performance skills. They run sessions with other, younger, young people and find out what the issues are currently. Then they make a forum theatre piece and tour it around South London. They also get commissioned by a range of organisations to deliver events and developmental projects. We run theatre making groups in 7 sheltered housing units in our area involving older people in theatre-making, as well as running the Rotherhithe Shed – which is aimed at people who might live alone and are interested in making or tinkering or meeting with others to chat and chew the cud. At the centre of it all sits our aim to animate our area and build community through creative and inclusive theatre. And it works!

The company had to completely reinvent itself after funding cuts in 2008 – how did you rebuild the company?

We looked to our supporters – our audience and community, and asked ourselves and them, how can theatre be useful. How can it be more than decoration? We found a lot of people who wanted to support the company and get involved. We realised we had knowledge that people valued and we sort of put a price on it. We developed the evidence case for our work and asked trusts and foundations to fund it. Slowly, through a lot of hard work and a bit of luck we have rebuilt. We went from 10 staff to 3. Now we are back up to 8, and have a range of income streams. But it’s been ‘real’.

I’m working on a piece called ‘Primary’. It’s about Primary Schools – and is being built from interviews with school staff, parents, children, educationalists and people who have been to Primary schools all over the world. It’s what I call a ‘Vernacular’ piece and will be performed by a community cast and choir of 40 people of all ages in promenade form in a disused school. It’s being written by Sarah Woods working with a process we call the ‘Foraging Technique’ which involves our community in research and development of material. It considers what we value about primary education and looks at what is happening with schools today. Vernacular Theatre brings a sort of community voice – or a civic chorus – to a subject of public importance. It’s very powerful seeing children, adults and elders working alongside each other. Inspiring.

Tales from the Arabian Nights is on in Southwark Park (1st – 6th August) and Greenwich Park (9th – 19th August). For more information & to buy tickets: http://londonbubble.org.uk/page/tales-from-the-arabian-nights/

One response to “Interview: Jonathan Petherbridge on the return of London Bubble to Southwark & Greenwich parks”