Based on the infamous novel by Charles Dickens, the Open Air Theatre’s production of Oliver Twist ambitiously tries to spin the story into something fun for its young audience, but ends up tying itself in knots.

While Fly Davis’ promising design looks absolutely incredible – the performers strut over shipping containers in loud steampunk costumes, like Tim Burton’s Halloween Town has been relocated to a dockyard – this is a confusing few hours. All characters bar Oliver are played by just eight actors, and often the differences between parts aren’t pronounced enough; Mr Bumble and Sykes are differentiated only by a hat being turned around, Dodger and Noah have the same accent. It’s all a strange mix of overblown caricature and insincere realism, mixed in with some ever-so-slightly-lazy stereotypes (Fagin’s gang are all backwards-cap-wearing, graffiti-drawing teens in a cringe depiction of ‘yoof’ and of course the thinnest woman in the cast is also the kindest, most innocent and most loved in each of her two main roles).

What’s stranger still is that Oliver never really feels like part of the action – he doesn’t get many lines. In a cast of adults, some of whom are occasionally playing kids alongside child-actor-Oliver, he gets lost. For a show aimed at children, Oliver Twist pays very little attention to them. 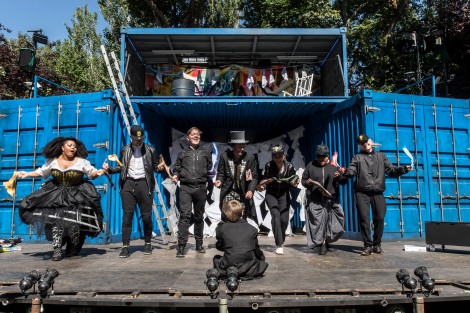 There are enjoyable moments – like when Fagin’s boys teach Oliver how to pickpocket through dance  – but they are easily forgotten in a show that doesn’t know who it’s for, or what it stands for. Dickens’ novel set out to criticise the vicious cycle of poverty that Oliver ends up trapped in, but his pure nature sees him escape. There is something slightly disconcerting about the way the rest of the characters talk about young Oliver in Anya Reiss’ adaptation, though: “He’s not like us,” Nancy says. But the only reason this could be is that Oliver – who suffers a chronic lack of character development, which a sweet performance from Lewis Fernée cannot help – is “a gentleman”. Oliver’s lack of stage time or dialogue means we can’t establish him as kind or resourceful, and so we can only assess that he is not like Dodger, Fagin and Nancy simply because he was born “a gentleman”, his extraordinariness nothing more than the result of perceived good breeding.

If the Open Air’s awkward show is meant to show how it feels to be trapped in a confusing class system that doesn’t care about you, it does a good job – it’s as convoluted and imposing as the issue of poverty itself, but in being so is alienating, which won’t do much to help its young audience actually engage with the issues at hand.

Rosie lives in London and works in theatre marketing. You can read her (sporadically updated) blog about theatre and performance here. Find her around the internet as @rcurtis0914