Existing in Brexit Britain is a state of tedium combined with anguish. Our impending exit is all the papers are talking about, but the last thing I want to read: I’m weary of the comment pieces but wound up by talk of leaks and tactics; both completely disconnected from, and deeply invested in, negotiation discussions. I’m unwilling to engage in any further speculation about the government’s secret studies into the economic impact, while just the creeping price of chicken kievs and broccoli in Sainsbury’s is enough to send me into a serious spin about my future. 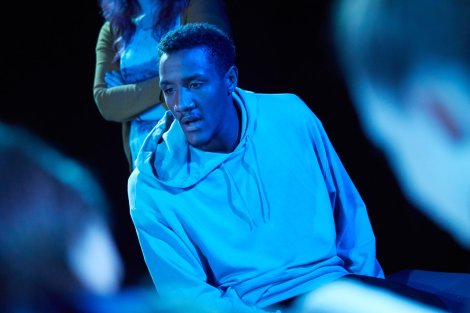 Sometimes the Brexit divorce feels remote and distant, especially played out in the media as two simplistically separate camps squaring up to each other; other days, feeling part of a wider faction gives a longed-for sense of community in such a divided and divisive climate. At times, I can consciously take a step back from it all, but I know I need to because I have so much skin in the game. Basically, Brexit is complex, messy and emotionally charged on a micro and macro level – whatever side of the fence you’re on, it’s been one big headfuck since June 24th 2016.

What Once Was Ours looks at the conversations occurring on a national scale, and their connection with the very personal causes and repercussions of what’s happening. It does this through the eyes of those who were unable to vote: Zest Theatre and Half Moon Theatre’s co-production gives a voice to those who didn’t have a say.

This is the group who, some argue, have the most right to feel angry – ‘betrayed by their parents’, and ‘cheated of their futures’, those 1.46 million 16- and 17-year-olds might well have swung the result had they been allowed to go to the ballot box. Post-referendum analysis has cultivated this narrative of generational divide, routinely portraying younger and older voters’ views on Brexit as completely polarised. This overgeneralized evaluation makes some of the views heard in What Once Was Ours surprising . Interwoven through the production are recordings of young people’s opinions on some of the issues surrounding Brexit, gathered equally from areas that voted to leave and to remain: anti-immigrant sentiment, for instance, is very uncomfortable to listen to, particularly alongside one girl’s excruciating story, told through sobs, of the racist behaviour her family has encountered.

These interviews are also the basis for Callum (Jaz Hutchins) and Katie’s (Pippa Beckwith) story. The two half-siblings are reunited after a decade apart, but though they share a father, they couldn’t be more at odds: differences in heritage, hometown and upbringing divide them. But this two-hander isn’t split down clear fault lines. It uses two lives to draw attention to, and then explode, the idea that anything is as black and white as the arguments and rhetoric surrounding Brexit often are: in or out; Brexiteer or Remoaner; racist, badly educated and poor, or unpatriotic, elitist and rich. Brexit Britain isn’t, in fact, newly fractured – the fissures run deep, the roots are far-reaching, and often they’re passed down the family tree.

The audience are invited to sit or stand anywhere, forcing a group of strangers together, and occasionally uprooting them at Callum and Katie’s direction: in this way, the immersive design cleverly gives the audience physical experiences that reflect the themes explored in the production. As voices whip around the space – Callum’s, Katie’s, young people’s from across the country – the impact of what they’re saying is intensified by the audience’s proximity to one other. It’s uncomfortable to hear shocking views and witness upsetting encounters, knowing that they affect and involve every single person in the room (when does that ever happen?) and being acutely aware of every.single.person.in.the.room. There’s an emotional electricity zinging all over the place.

The voices included in What Once Was Ours can be disparate and extreme, but if you listen, they’re often saying the same thing. There’s a shared sense of disillusionment and frustration, struggle and invisibility on all sides: a common place, the play seems to suggest, from which to build empathy. But this isn’t the only source of optimism: to be honest, what makes me really hopeful is that such a phenomenal piece of theatre has come out of such a monumental shit storm. Watching What Once Was Ours is fucking painful and completely exhilarating.