Scrolling through my Facebook feed instead of writing this review, a news story caught my eye: “Lost teddy bear flown 200 miles to be reunited with distraught four-year-old”. There’s a picture of Teddy buckled into his own seat on the plane, another of him having a tour of the cockpit. Loganair, the generous airline who covered the teddy’s b-airfare (get it?), knew that this would make for a great, relatable story: it takes the sincere love that we have for our childhood toys seriously and by treating Teddy as if he were real, in a way makes him so. That’s the brand of magic at the heart of Margery Williams’ much-loved 1922 book, The Velveteen Rabbit; the Unicorn Theatre’s adaptation so successfully captures it that this is the production’s fourth run. 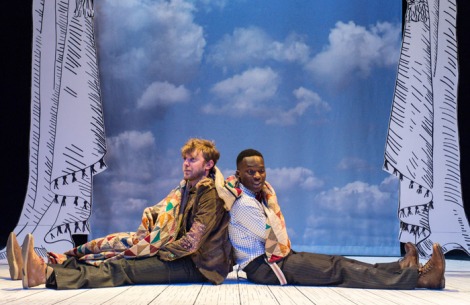 The stage is the perfect place for this story. Christian Roe, who plays the stuffed bunny given to Boy one Christmas, doesn’t have long ears or a fluffy tail – he’s a bloke in a black roll-neck and velvet jacket. The wisest toy in the nursery tells him that becoming real “isn’t how you’re made, it’s a thing that happens to you when a child loves you for a long time” which, a study suggests, is true (not that anyone who has ever been a child needs this research as proof). Children love their favourite toys into life: ‘“The children know these objects are not alive but they believe in them as if they are.”’ And that’s the magic of theatre – if we are open to seeing the man in the brown jacket as a rabbit, he becomes one.

Roe’s wide-eyed bunny flops to the floor, patient and still, when casually tossed aside by Boy (Ashley Byam) or his Nana (played by the narrator, Stephen Kennedy). But when Boy loses his favourite toy, a busy Nana offers the Velveteen Rabbit as a companion instead, and the two quickly become inseparable. Seasons pass, their adventures shift from pillow fights and playing pirates in Boy’s bedroom to hide and seek in the garden, and Rabbit’s appearance becomes shabbier and shabbier – Boy offers Rabbit a succession of jackets to wear, each more threadbare than the last. Rabbit is too happy to care: the loss of a button nose or the need of a mending patch are, as the wise toy said, a sign that he is becoming real.

With James Button’s simple, classic design which also sets the story in the decade of its birth, the 1920s; Jason Carr’s live piano accompaniment, which gives the production the feel of a silent film; and David W Kidd’s lighting design, which often casts the sepia tone of old memories across the action, The Velveteen Rabbit blends timelessness with nostalgia – it has the emotional pull and resonance of Peter Pan.

The tale’s conclusion has something of Peter Pan’s staging about it too, with a tiny moving light acting as a fairy, and Rabbit briefly taking flight with the help of the theatre’s rigging system. For the first hour or so, The Velveteen Rabbit conjures magic through imagination – Boy and Rabbit transform the spaces they’re in through their play, and their relationship develops over time because of Boy’s imaginative investment in his toy. But the final few moments are a shift in tone to fantasy, with Rabbit avoiding a desperate fate thanks to a fairy, an ending that feels anticlimactic for being so easily won. The Velveteen Rabbit’s enduring popularity isn’t down to spells or special effects, just like Loganair’s generosity wouldn’t have made the headlines had they just stowed the lost teddy in an overhead compartment.