The reason this review is so shamefully late, is that the show took place during a very hectic, and rather sad time for this reviewer. But Twinkle Twinkle shone a light into an otherwise dark time, and used that well known tune to bring a warm glow to the hearts of its audience, and send us into the world with a star shining safely overhead. The set is a bedroom full of triangles: the bookshelf rises narrower and narrower; the bed is pointed at its foot. The bulbs above, including the large central star-shaped light, are not lit. Instead, as we enter, two men throw a little glowing light to one another, throw it upwards into the bulbs, catch it and pass it on.

The play begins as a friendly, bearded father-figure is looking for Marty. ‘Marty!’ he calls into the room, and immediately the audience of children are helping, and calling for Marty too. Marty appears from his hiding place in the washing basket – a scruffy puppy puppet, all floppy ears and scrappy limbs. He is our child substitute, and we watch him playfully resist getting into the bath, resist getting out of the bath, and eventually even resist going to sleep.

Their dumb show is familiar and delightful, and they throw the game to one another just as the two men who welcomed us passed the yellow light between them. Marty won’t get in the bath, so Dad becomes a matador, tempting him with a challenging towel. Marty doesn’t want his dad to leave, so he knocks his teddy bear onto the floor, requiring his return. Each action is a call, each interaction an answer. Their bond is shown and strengthened as they play.

Teddy safely back in bed, Dad takes a now-familiar yellow ember, as if from his heart, and throws the light upwards, igniting the star suspended from the ceiling. Before he leaves he calls out ‘Marty, I love you!’ 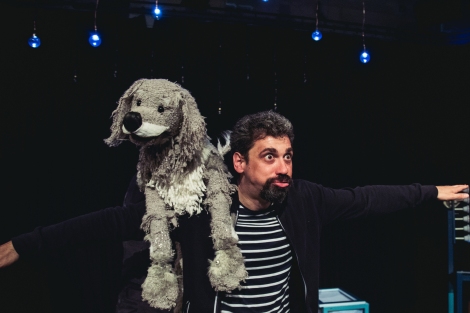 As Marty drifts off to sleep, his headboard becomes the scene of a simple light show – two circles of light behind a screen, growing, shrinking, playing, bouncing. They are the light of stars, they are his dancing dreams, they play the game of action and interaction. They show us simply how enchanting it can be to share moments with those around you.

The light show fades, and Marty wakes in the night to find the star above him has gone off! So Marty starts to experiment: he barks at the star to make it glow, he finds the light has moved to his teddy, his own paw – he even climbs his shelves to follow its magic. It is then he hears the echo of his dad’s last words, ‘Marty, I love you!’ and they light up his heart. With one bark, he returns the light to the star above him.

Now the other bulbs are lighting up in celebration, ringing like bells, and they play a familiar tune. Marty wants to share the celebration; he brings out a cardboard box full of coloured hand bells to hand round the audience. Children pour forward, rushing the stage at a rock concert – a star is born. Marty’s light shining in his paw, everyone sings and rings along.

After all the excitement, Marty returns to the comfort of his bed,:the light is now aglow in his heart. In the quiet that follows, Dad returns to the room to check on his Marty, ready to provide a light if its needed. But he sees that Marty is already sleeping softly in the glow of his own light.

This apparently simple story joyfully shares the joy of sharing. Sharing a moment, sharing a game, sharing a song – those things light us up. Like any great star, when the show was over, Marty’s fans flocked to meet him, and of course, he was happy to oblige.

Charlotte Fleming is a blogger, proofreader and editor, and Managing Director of I Read Your Writing. Charlotte is cisgender female and writes from her experience as such, but would welcome comments from anyone else who have seen the show. Follow Charlotte at @ReadYourWriting

One response to “Twinkle Twinkle”