The noise, the violence and the flickering lighting: the Tobacco Factory Theatre’s production of Macbeth is not for the faint hearted. Which is why school children and students should see Shakespeare’s tragedy stripped back to its core emotions in a visceral and violent production.

However there are a couple of problems which hamper its success: the gravel and the sound. The performance area is covered in a thick layer of dark gravel which works as a base for the battle, murder and outdoor scenes but hampers anything indoors. It soaks up the sound, dampens the acoustics and gets everywhere. And if you are Lady Macbeth in her six inch heels it’s a potential hazard. The sound effects and sound scape music are often too loud and out of touch with the words, as happens in the Porter’s ‘who’s-that-knocking’ scene when her words are eclipsed by the irritating high decibel banging.

Those points aside, director Adele Thomas’ production is filled with action as the drama races along at a pace, interspersed with some of Shakespeare’s most famous poetry and speeches. Katy Stephens as Lady Macbeth was wonderfully unhinged and was clearly the driving force in the relationship although the chemistry with a slightly stiff Macbeth (Jonathan McGuiness) was uneven at times despite her passion. Banquo (Aaron Anthony) was suitably heroic while Joseph Tweedale as Macduff had the right amount of honour and confusion as he wrestles with the unsettling conflicts sown by the actions of the Macbeths. 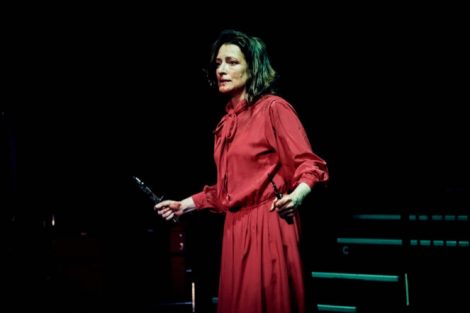 Having children cast within the play accentuates the horror of the murder of Macduff’s son and wife (Maggie Bain) as well as the brutality of Banquo’s death as young Fleance escapes. Praise be for the young actors: Lila Howe, Polly Leach, Benjamin Pleat and Thea Underwood. Praise also for the fight scenes and in particular the battle between Macbeth and his nemesis Macduff choreographed by Kevin McCurdy. And more praise for the way the witches are portrayed with use of Gaelic, ghostly white gowns and the strange glowing white cube which crystalized their predictions and the final destruction of Macbeth himself.

A blisteringly brutal, viscerally violent and refreshingly modernist production that should be seen by all students of English, drama and psychology – and indeed anyone interested in the state of the human mind.

This review was originally published on HarryMottram.co.uk