It feels like your typical Sunday afternoon at the library: we’re quietly gathered on the carpet in the children’s corner for a storytelling session from Miss Merriweather and Mr McBee, who are the very picture of librarians in their tweed and cardigans. We’re partitioned off from the teenagers battling through revision guides and the senior citizens flicking through newspapers, with the sound of books being stamped faint in our ears. 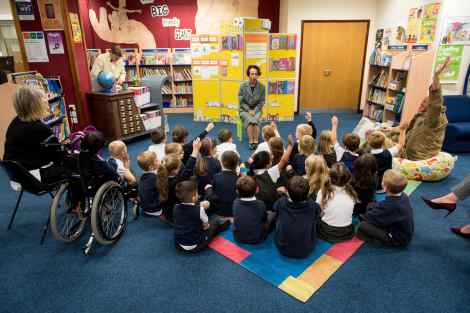 It’s a firmly child-only event: Miss Merriweather turns away a mysterious bloke clutching some Lidl bags, but, feeling guilty, begins to read us the book he left behind. That’s an awfully familiar tweed suit… and a remarkably similar cardigan… Miss Merriweather and Mr McBee are not only in the picturebook, but as they turn its pages, the story comes to life.

It’s a clever framing device for this adaptation of Michelle Knudsen and Kevin Hawkes’ Library Lion, which positions the audience as both participants in, and co-creators of, the tale. The titular big cat joins us for story-time, and is such a fan that he insists on returning to the library each day. Not only to listen to stories, but to help with odd jobs – like a particularly enthusiastic work experience wild animal.

While Miss Merriweather remains staunchly welcoming, Mr McBee feels threatened by the new volunteer’s conscientiousness, and orders him to leave at the earliest opportunity, despite the protestations of children in the audience. Throughout the show, the audience energetically interact when skilfully prompted by the performers, but it is following this specific event that the interaction takes on a new level of richness, and the play becomes wholly child-led: Mr McBee asks the gathering of littl’uns what happened, and they aren’t hesitant to describe his mistake, explain its cause, and suggest a solution. The carpet time storytelling session morphs into a quest to find the wronged feline – Mr McBee becomes a pied piper of lion-seekers, as the show’s participants dash through the library to find their hero.

Sometimes, the play makes clear, rules need to be broken – whether that’s helpfully roaring in a library or transporting a children’s show outside of the building mid-performance. When the lion is discovered perched on a slab of concrete outside Costa, it sparks frenzied celebration, to the mild bafflement of the watching Deptford public. This marks a crescendo of the excitement exhibited by the young audience: from contributors, to directors, to victorious adventurers, the children’s gleeful participation is artfully stoked by the show’s writing, choreography and performance.

Library Lion is both a passionate love letter to libraries and an unconventional piece of interactive theatre.

One response to “Library Lion”