Director Collette Murray tells us about the world premiere of Seek, Find, Speak, the outdoor theatre companion to the illustrated book The Lost Words by Robert Macfarlane and Jackie Morris playing at Timber Festival this July. 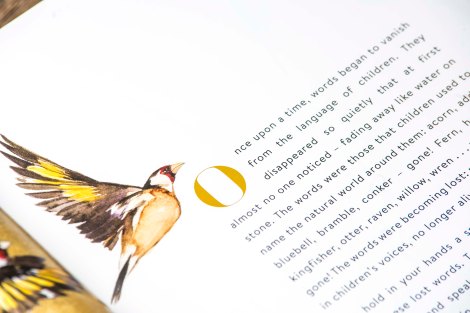 Having read Robert Macfarlane’s other writing during my training as a forest school leader a few years ago, when I spotted this golden tome on display in Sainsbury’s, I virtually pushed people out of the way to get my hands on it! I took a deep breath as I focussed on the astonishing cover illustration by Jackie Morris. For the next forty-eight hours, my eight year old son and I poured over The Lost Words, sometimes reading Robert’s wordspells, sometimes sitting in silence with Jackie’s paintings just pointing at our discoveries but, most importantly, feeling the constant compulsion to speak the words out loud over the illustrations.

“Once Upon a Time, words began to vanish from the language of children…” starts the story of The Lost Words… As a theatre maker and voice coach, I’ve never had such a clear clarion call. This, and the delight of sitting with my son and the book, was enough internal nudging that to realise I had to turn this into a piece of outdoor theatre. So, I did everything to contact Robert and Jackie for permission – I even signed up to Twitter!  Imagine my joy then when Rowan and Sarah at Wild Rumpus offered to commission it for a major new festival with the National Forest Company, TIMBER. 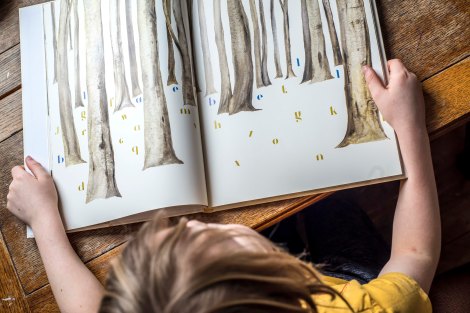 As part of my research, I went to listen to Jackie speak and watch her paint recently.  She spoke with heart of her dismay at the notion that some things are ‘too good for children’ and ‘that’ll do…it’s only for kids’.  She said she writes and illustrates books for ‘people…people…some are young people… some are older people…. people.’ I share that sentiment entirely in my work with words, language and story.

Children of all ages are competent and curious learners, explorers who need the opportunity to move and discover the world. If there’s anything that will remind us all that we were once children, it is the possible glimpse of a Kingfisher or picking up a beauty of a conker.

In Seek, Find, Speak, I intend to make a piece of intelligent and literally enchanting piece that can be shared across the generations, with childlike attention to detail. Children (of all ages) will be invited to join a charm of goldfinches to find the lost words in the forest.  The word spells will be heard spoken from afar, coming out of trees, from behind bracken, deep under ferns. Clues from Jackie’s illustrations will guide the way in intriguing golden art installations. Participants will walk, run, creep and crawl around the forest to become conjuring nature agents tasked with Seeking, Finding and then, vitally, Speaking the spells back into their mouths, their imaginations and our world.

According to the RSPB, the population of Goldfinches is up 11% this year.  This is very likely to be, in part, because people are recognising them, naming them and therefore feeding them in their gardens.  Naming is a deeply important cultural activity. We notice and care for things that we recognise and have names for.  The Lost Words gives us opportunity to name and care for the nature environment. By taking The Lost Words into an outdoor setting with Seek, Find, Speak, participants will be reminded that we are part of the environment – not just visitors to it. 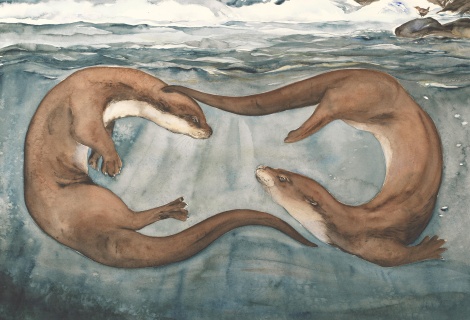 Adapting this work feels like a huge and exciting responsibility. To reproduce the work of the book as Jackie and Robert created is actually less difficult: the source material is so accomplished and full of the makers’ integrity. To recreate the feeling of mystical wonderment and awe that all who encounter the book express, that is the real and inspiring golden challenge.

Timber is a major new festival where music, forests, art and ideas will weave together into an exhilarating weekend in the heart of the National Forest, one of Britain’s boldest environmental projects. www.timberfestival.org.uk 6-9 July