Stories on a String starts with an inviting journey to a bustling market in downtown Sao Paolo, with singalongs and a stall selling booklets full of stories. The story that Dotted Line and Polygot Theatre have chosen to share from their stall – using a theatrical style inspired by Literatura de Cordel, a type of Brazilian storytelling with music – is about Jacina, a young girl who spends her life glued to her phone screen, until she ventures into the Amazon rainforest on a quest for some berries to help her grandmother’s aches and pains.

The songs – largely performed by Rachel Hayter and Camilo Menjura, with additional vocals from puppeteers Jum Faroq and Ajjaz Awad – are vibrant and upbeat, buoying the audience’s enthusiasm even when the story itself is perhaps a bit patchy. The puppetry is beautiful, with bob-haired, bouncy Jacina and her cuddly Grandma being the definite highlights, though some elements are created using 2D paper puppets which, while still beautiful, feel lost even in Little Angel’s small space.

Jacina’s journey into the Amazon is fun and nicely realised, feeling suitably tense when she gets lost before figuring out there’s not much phone signal in the depths of the forest. Her encounters with the various mythological inhabitants of the Amazon, even with the too-brief warnings of Grandma, can feel like they come out of nowhere or are not quite explained enough, so don’t slot in well enough to add much significance. 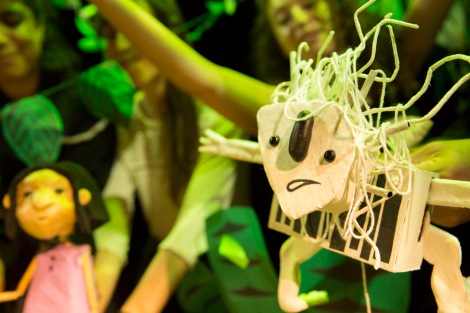 The message, too, is a little jumbled – perhaps Jacina is on her phone quite a lot, but taking photos of the Amazon or trying to use it to find a map once she’s lost seem like perfectly reasonable things to do, and it is a bit strange that the show sort of judges her for it? Given that 1 in 5 couples now meet online, it seems likely that at most children’s shows at least a handful of audience members will owe their very existence to the rise of social media and apps, and the desperation of so many theatres to tell young audiences that technology is Bad Bad Bad is a bit wearying. Fortunately, Stories On A String does offer the revelation that Grandma is also a WhatsApp user, suggesting that perhaps social media isn’t bad in small doses – it’s just not explicit enough and so muddies the message of this generally charming production.

Rosie lives in London and works in theatre marketing. You can read her (sporadically updated) blog about theatre and performance here. Find her around the internet as @rcurtis0914