Vicky Ireland’s funny and gripping adaptation Double Act, based on Jacqueline Wilson’s multi award-winning book, was an instant hit when it premiered at Polka in 2003 and loved by thousands of children during a UK tour. Now, it’s back to delight a new generation of audiences this summer – here’s performer Ruby Ablett on becoming an identical twin, meeting Jacqueline Wilson, and more… 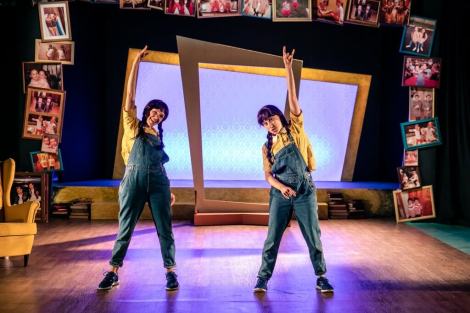 Tell us about Double Act – what can audiences expect?

Double Act is a bonkers show, with lots of fun, and lots of colourful, wonderful characters. However, the story is set just a few years after Ruby and Garnet’s mother has died, so there is a complex emotional story at the heart of the show. The family are grieving and the twins are going through some big changes. It’s a show about family and growing up, but it’s also laugh out loud funny (there’s even some dancing!)

You play one half of a pair of identical, inseparable twins, Ruby and Garnet – how have you and your co-star Lydia Orange prepared to play characters who are so close?

One of the first challenges we tackled was finding a shared voice for the twins. I am from Leicestershire, so my accent is different to Lydia’s. During rehearsals we were able to spot differences in our accents, and I had to practise my vowel sounds so that they matched Lydia’s. We also worked hard to match our movements, which, over time, has become something we do intuitively on stage.

We both read the original Jacqueline Wilson novel, which told us so much about the twin’s relationship. It gave us an insight into their past, and helped us to understand the way they think about each other.

The production is based on Jacqueline Wilson’s book Double Act. The novel was first published over 20 years ago, and this adaptation originally toured in 2003 – what is it about these characters and their story that has such an enduring appeal?

I definitely think there’s a real fascination when it comes to identical twins!

I think what is so special about all of Jacqueline Wilson’s novels is that they tell real stories – with all the difficult parts left in. We get to experience Ruby and Garnet for real, and we can all relate to the challenge that is growing up and finding your place in the world.

Did you read Jacqueline Wilson growing up? What’s your favourite book?

I loved Jacqueline Wilson’s books – I read so many of them. I remember really enjoying Diamond Girls and Secrets. I learnt so much from her books about other children’s experiences that were often very different to mine. I actually went to a Jacqueline Wilson book signing when I was about Ruby and Garnet’s age! Jacqueline asked me if I’d read Double Act, because there was a character in the book that shared my name. I replied, of course, Ruby was my favourite character, and I wanted to be an actress like Ruby!

Why should people come and see Double Act?

People should come and see Double Act because it is joyous, hilarious, and has an important story to tell. Whether you are an adult or a child (or even a twin) you will learn something from Ruby and Garnet.

Double Act is recommended for ages 7+. The show runs at Polka Theatre until 5th August 2018, for further details click here.