A few days since our return, my eight year old daughter – and let’s be honest, my husband and I too – is still buzzing from this year’s wonderful, reassuringly safe, and spellbindingly creative Just So Festival. At Just So, a whole world is created for you: from the moment you step across the threshold with wristbands aloft, you’re whisked away to somewhere else, somewhere away from the modern world and anything troublesome within it, for an entire weekend. 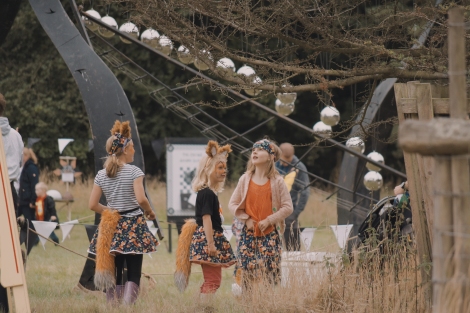 Festivalgoers at the Playground of Illusions from Travelling Light Circus

Once the tents are all up, it’s not long before excited children and their friends and family appear as foxes, stags, owls, frogs, bees, lions or fish. Everyone chooses a ‘tribe’ to join, and an associated animal to become. Then you hunt, persuade or perform to procure golden pebbles; whoever forages enough is crowned the winners at the tribal parade and tournament on Sunday evening. This element adds a wonderful arc of excitement that stretches across the three days.

That’s not the only cause for excitement, though – this year’s theatre line-up didn’t disappoint either. To watch theatre in the open air certainly has a special sense of magic, conjuring up the history of live performance that has so often taken place outside, from Shakespeare’s Globe to the amphitheatres of ancient Greece. It’s nourishing to be close to nature, amid the informal gathering of an outdoors audience, waiting for performers to appear in unusual and surprising ways, or watching while actors warm up.

Just So is based in the beautiful Rode Hall estate in Cheshire, with its deep and enchanting forests, lakeside clearings and dug out auditoriums. Performances take place in different spots: we went to the Village Green, for instance, for Special Delivery, a sweet and gentle treat of a story from A Bird in the Hand Theatre. It follows a postman who, appropriately enough, seems to be made entirely out of brown paper – from his bicycle to his basket, his parcels to his uniform. When labels are lost in a rain shower, he must find their intended destinations in this charming mimed piece. It’s a witty performance full of surprises, with clever puppetry around an intricate set.

Our next show was in the High Seas area, a space so windy that at one point a helpful audience member had to hold a part of the set up! Just So regulars, The Fabularium, were back with a brand new production, There Be Monsters. This romping promenade show tells the story of Don Quixote and his long suffering side-kick Sancho Panza in their quest to rid the world of evil. This troupe always create an imaginative, high energy spectacle which the young crowd adore, and this was an accomplished outdoor performance full of wit and excellent vocals

An early start on Saturday took me to the Peekaboo area, which perfectly caters for babies and toddlers aged 0-3 years. Inside tents for pregnancy yoga, baby massage and bathing, baby book club and much more, was The Bewonderment Machine, another show from A Bird in the Hand Theatre. Youngsters sit on a charming wood-carved animal carousel accompanied by sweet fairground music, all powered by a performer riding a bicycle. She asks the little group to introduce themselves to the rabbit or fox they are riding and to tickle their chins! As the carousel revolves, butterflies and birds dance over the heads of children, who are entranced by this joyous, imaginative miniature merry-go-round. Kate Flatt Project’s Weatherman was performed nearby, a mesmerizing and witty tale of two characters who spin magic out of dance and the weather.

Hikapee’s Look Up is one of the highlights from this year. We’d unknowingly walked in and around their set made of four large ladder struts before, but now a pair of trapeze swings had been attached. It’s a show about our obsession with screens, reminding us what we’ll find if we just look up from our black mirrors. The four amazingly talented acrobats left the audience gasping, in awe of their skills. With masterful puppetry too, the show wowed every crowd over the weekend. 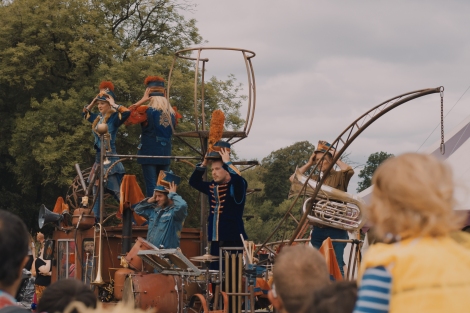 The Band at the End of the World by Ramshacklicious

Helen Eastman’s Bicycle Boy is, like many of the productions, presented in association with outdoor arts champions Without Walls. Set in a bicycle repair shop handed down through the generations, brothers Sam and Mike, here to clear out their grandad’s workshop, reminisce about their boyhood love of bikes and their superhero alter-egos, ‘Bicycle Boy’ and ‘Pedal Power’. There’s songs, music (using everything they can find from bike frames to stabilisers) and finally a treasure hunt, left by their late grandad, along the way. With audience participation to use pedal power, it’s a lovely, gratifying and funny tale with strong performances.

Following the splendid lantern parade was our final theatrical treat on Saturday. With the backdrop of the stunning Rode Hall mansion, amazing shadows were cast by circus acrobat masters the Bullzini Family in Eisoropia. The huge crowd were awestruck by a troupe that made a high-wire act look like a walk in the park!

Just when I thought I’d seen more theatre than you could shake a stick at, there were yet more delights on Sunday. First up was Ramshacklicious’s The Band at the End of the World, a curious piece of theatre. A group of musicians – who look like characters from The League of Gentlemen – are driven into the Roll Up, Roll Up arena in a very ramshackle vehicle, here to help us through what they believe is a pre-apocalyptic world. There are no words, just music, in the weirdest forty-five minutes of the weekend. Of course, the children loved the crazy daftness of it all and there were plenty of laughs for the grown-ups too.

Seek, Find, Speak is the official spoken word adaptation of Robert Macfarlane’s book The Lost Words. In this exploration of technology and how to escape it (a bit of a running theme over the weekend, and what better place for it?), we are led by the charming Goldfinch performers to seek out words, spells and poems along a forest trail. It’s a beguiling journey with strong and characterful performances, and a powerful reminder to seek, find and enjoy language and nature.

In the gorgeous Woodland Theatre, with its muddy wooden seats for the stalls, we were lucky to catch Like a Tree by Hocus Pocus Theatre. I think this is one of my favourite shows of 2018. Set in a vintage Silver Cross pram with an ornate puppet theatre attached, Like a Tree is the heart-warming tale of a newborn child and a sapling whose lives become entwined as they grow. It’s a moving show about loss, conflict and renewal, with an absorbing and engaging performance by actor/puppeteer … as Mother Nature, who shares a touching, personal story about the history behind the pram.

And that’s just the theatre! There’s a huge programme of diverse events at Just So, including woodland crafts, games, dancing (so much dancing!), pillow fights, campfire singing and storytelling, custard catwalks, glorious maypole dancing, midnight feasts, lantern parades, two brilliant live music stages and much, much more. There are also wonderful opportunities to learn something new, and with a thrilling circus theme threading through much of the festivities, the festival itself is the greatest show of all!