Reviewed by Flossie Waite
A Unicorn Production in association with Filskit Theatre
Playing at Unicorn Theatre until 6th January 2019
For ages 2-5
This is a deaf-friendly and autism-friendly show.

At this time of year – at least, definitely around Christmas – we all turn a bit ‘penguin’: huddling together for warmth, and keeping our loved ones close by. But in the wintery white world of the Unicorn and Filskit Theatre’s new show Huddle, we have even more in common with these aquatic, flightless birds, as a penguin dad experiences the sleeplessness and steep learning curve that is parenthood.

Filskit Theatre have a proven track record of making shows about fluffy animals living in snowy environments for ages 2-5 – their 2015 show Breaking The Ice was based on the true story of an unlikely friendship between a polar bear and a husky. Huddle utilises this winning formula, starting with an impossibly cute double act at its centre. The show is wordless – the penguins communicate only through a kind of cawing sound that the audience quickly and enthusiastically adopt too. There’s also projection (Ioanna Varsou’s animations conjuring the plains of Antartica peopled with penguins), movement (Dad’s almost-always successful tricks with the unhatched egg; chick’s first waddle), and Owen Crouch’s atmospheric soundscape – hearing the whipping wind brings a blizzard to life. What is different is that Huddle is the very first Filskit production to feature a performer that isn’t one of the company’s three founders: co-Artistic Director Victoria Dyson, as the wide-eyed, curious chick, is joined by Joseph Barnes-Phillips, who is both amusing and convincing as her protective, proud, loving Dad. 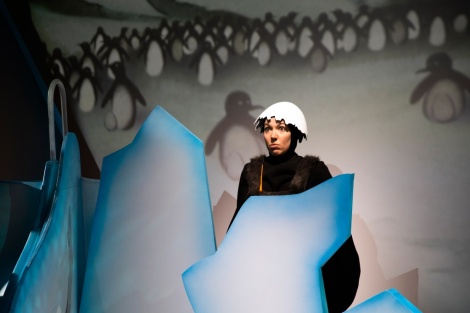 Funny, festive and family-friendly, this isn’t March of the Penguins – it’s the stuff of John Lewis adverts.