It’s 10 years since the original version of Into The Hoods, and the production’s history reads like a fairytale. Director Kate Prince created the show as a vehicle for her and her friends to move away from backing dancer roles and into the limelight as artists in their own right – suffice to say, she achieved her aim whilst simultaneously changing the face of dance theatre. During the past decade, the production has had sell-out runs at the Edinburgh Fringe and Southbank Centre, won a What’s On Stage award and been nominated for an Olivier, and become not only the first ever hip-hop dance production in the West End, but one of the longest running dance shows ever in West End history.

Inspired by Stephen Sondheim’s musical Into The Woods, the show has been described as a ‘hip-hop pantomime’. Though this modern retelling is humorous to be sure, the comedy often relies on canny observations of contemporary life. When two lost children find themselves in the Ruff Endz Estate, it quickly becomes clear that the local villain is the landlord. When he’s not threatening the tenants of Beanstalk Towerz with eviction, he’s telling them off for anti-social behaviour. Tight-fisted, he demands that the two children find four presents for his daughter’s 18th birthday before he’ll give them money for the bus home.

Though the estate’s occupants are initially scary faceless hoodies, the kids soon realise that they’re just unfamiliar rather than frightening, and that on every floor of the tower block a tenant is dreaming of a better life. There’s Spinderella, who wants to be the best girl DJ this side of Hackney; Prince, a charming philanderer who fancies himself as a C-list celebrity; Wolf, a wannabe manager who runs Big Teef Records; aspiring singer Lil’ Red; budding producer Jaxx, and ambitious MC Rap-On-Zel. As the children continue on their quest, they find themselves within the characters’ stories – front row witnesses to Jaxx taking on the giant that lives in the penthouse flat, and nicking the Nike gold trainer that Spinderella leaves behind as she makes an awkward exit from Prince’s advances. 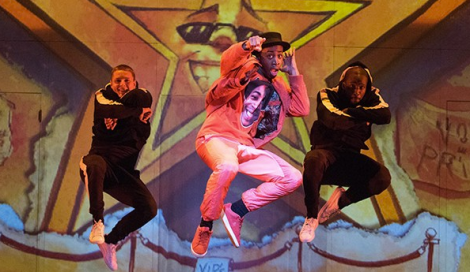 So how has Into The Hoods been ‘remixed’? There’s an updated soundtrack: Musical Director DJ Walde’s eclectic selection of almost 100 tracks accompany, and lead, the narrative, from Japanese jazz to gangsta rap. There’s also some new choreography, a new set design, new costumes and a new cast; though it seems like an awful lot has changed, by all accounts the show maintains its original appeal.

Though technically ten years old, the show still feels like its doing something new and different, which in some ways is great, and in other ways demonstrates the very slow progress made in theatre land. The old ways of watching theatre – silently, and sitting back – are gradually changing, as a relaxed and inclusive atmosphere become the norm: the audience are explicitly told to make as much noise as they want, and it feels almost perverse to remain inanimate when faced with the energy emanating from the stage. With productions and venues constantly being called out on their lack of diversity, Into The Hoods: Remixed is a rare chance to celebrate a production doing things right, showing what the future of all theatre should – and must – be.

Prince describes Into The Hoods: Remixed as “silly – it shows the lighter side of hip-hop culture”. But don’t underestimate its impact – just because a show is light doesn’t mean it lacks substance. It’s no small feat to make a group of individuals in an auditorium feel like a temporary community, sharing the pain of cheeks tired from smiling, experiencing the energizing buzz in the room that makes each audience member feel more alive.

One response to “Into The Hoods: Remixed”