Tea Break Theatre’s adaptation of The Elves and The Shoemaker eschews elves in favour of Bobbin – a little puppet made of multicoloured bobbins who comes to life when the cobblers are asleep. With the speech patterns of a teletubby, the tendencies of a Toy Story character, and the personality of a curious four-year-old, he is instantly endearing. Keeping this winning figure central to the story, the narrative moves away from the traditional tale (elves prevent a poor shoemaker from falling into poverty by making shoes for him through the night). Instead, we follow Bobbin as he explores his new surroundings for the first time. 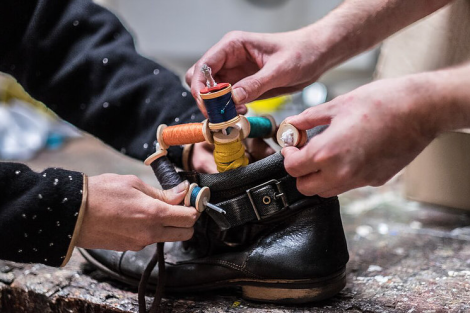 Bobbin is at best an impolite houseguest, and at worst a reckless squatter. He all but trashes the place as he investigates its contents, with shoemaking materials flying all over the shop. It is this reckless messiness – caused almost entirely by his enthusiasm – that the young audience respond to best, giggling as buttons burst out of their box and wool ends up on the floor. When Bobbin becomes inextricably tangled in reams of yarn, a girl in the front row dashes up to help him; the audience save Bobby’s bacon at the end as well with a very thorough tidy-up that leaves the shop looking as if he was never there.

To be fair, the chaos isn’t all Bobbin’s fault. Boxes start to rattle as their contents wake up  and pairs of shoes start zooming around the room, from a grumpy pair of boots that have everyone marching to a squealing pair of high-heels. Set during World War II (propaganda posters cover the back wall), the production includes lots of lovely music from the 1940s that blasts out of the wireless Bobbin happens across. Whether alone or alongside the other shoes Bobbin loves to dance, performing complicated routines from swing to samba to tap. These moments illustrate the tight puppeteering from the trio of performers (Chris Dobson, Bonny Davis, Elaine Hartley) – it’s no small feat to give Bobbin Fred Astaire’s feet!

The show starts to unravel slightly as it introduces objects that wouldn’t be in the shop – a first aid screen suddenly appears to conceal the operation Bobbin is performing on one of the shoes (which immediately makes you wonder what’s being hidden from the audience), and a shoe-shining rag randomly produces a ukulele which Bobbin attempts to play. It’s much more fun when things that would actually be in the shop are imaginatively brought to life, or experienced by Bobbin in new and exciting ways. But those are just small quibbles with an otherwise excellent experience: Bobbin is an extremely accomplished production from a company that definitely counts as ’emerged’ rather than ’emerging’ in Illuminate Festival’s lineup.