Everyone knows the stories of Little Red Riding Hood and The Three Little Pigs… But do you know the re-imagined Roald Dahl versions, where pistols and sass outweigh tradition, and not all is as it first appears? Kicking their tour off at Newport’s The Riverfront last night, Ballet Cymru have brought Revolting Rhymes to the stage as part of the Dahl centenary celebrations with a simple, mischievous piece of dance. 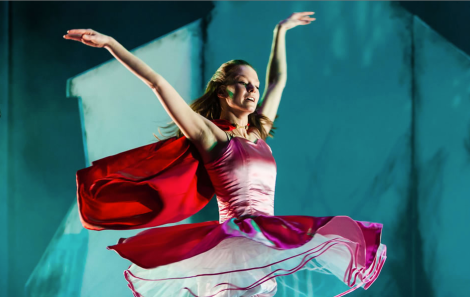 Despite a few opening night hiccups and a slow start, the stories were brought to life for a busy auditorium with humour and beautiful imagery as the performers took on various roles alongside the poetic narrative.  With minimal set and props, it’s down to the movement and strong characters to pull off the story and our heroin in red is particularly enchanting to watch as she leaps and soars across the bare stage.  Little Red proves to be slightly less innocent than previous incarnations would have you believe, and the house building materials chosen by the three little pigs result in tragic consequences: Dahl’s witty rhymes and wonderful imagination are injected carefully but firmly into the choreography.

The ensemble’s synchronized movement was wonderful to watch and the combination of the fun writing and the upbeat yet charming musical score was a winning formula.  As a first time ballet experience for many young audience members, Ballet Cymru have created a brilliant piece with a distinct hint of Dahl magic.

Kirsty works at the Wales Millenium Centre, the leading arts centre in Wales. She is part of the Welsh Young Critics’ scheme, and you can read more of her reviews on herblog. Follow Kirsty @chaotickirstyy