Honk! is the best West End-hitting, Olivier Award-winning musical you’ve (probably) never heard of. Inspired by The Ugly Duckling and written by Stiles and Drewe, the show had its London debut at the National Theatre in 1999, beating off competition from the likes of Mamma Mia and The Lion King to win Best New Musical. But despite thousands of productions performed to millions around the world since the show first opened 20 years ago, this latest staging is only the third time it has played in the capital which, having just seen Andy Room’s relentlessly excellent revival, seems pretty ducked up…

The production itself is a bit like a duck (stay with me here): calm on the surface – smooth, polished – but paddling hard underneath, as the cast of seven multi-roling, multi-talented actor-musicians sing, dance, play instruments, puppeteer and perform illusions. Ugly (Liam Vincent-Kilbride) is the unexpected, unusual-looking arrival; Ida (Ellie Nunn) is his ever-proud mum, who insists that, though Ugly may be different, he’s special. Not everyone at the duck pond agrees, including his insensitive dad Drake (“I’ve created a monster!”). In fact, the only other animal willing to befriend Ugly is the suspiciously-attentive Cat who lures him away for a spot of lunch… With duck a l’orange on the menu, it’s uncertain whether the secret cygnet will ever become a swan.

Though the story has been expanded, the message of acceptance at the heart of Hans Christian Andersen’s tale remains. Vincent-Kilbride is a very winning non-duck, whose chirpy, trusting innocence in the face of constant taunts and knock-backs is sweet and heart-breaking in equal measure. The bullying comes from all quarters – from the silly playground insults of his siblings, to the hopeless ignorance of his father, to the meanness of Turkey the teacher. In fact, the peckish Cat’s wicked ways are no match for the more psychologically realistic villainy of the duck pond’s inhabitants. But Honk! is just as much about a mother’s love as it is a community’s cruelty. It is Nunn who steals the show as Ida, effortlessly navigating this version’s additional narrative arc that requires her to play the patient but put-upon wife, the broody and nurturing mum, the playful and funny neighbour, and the desperate and relentless parent. 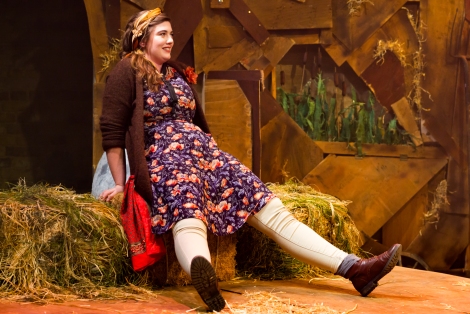 The production is bursting with lovely moments and ideas, like Ida and Ugly’s swimming session on the pond, propelling themselves about on swivel chairs, or the combination of stellar lighting and softly drifting material to create a beautiful underwater sequence. The music, under Oli Rew’s direction, is unceasingly good – there are no filler songs here – and performed imaginatively: there’s a paper and comb choir and spoon percussion, and when a loved-up Ugly accompanies himself on the ‘cello he moves it like a dance partner, not unlike Fred Astaire in the famous hatrack routine, only more impressive because he’s singing, dancing and playing all at once. So, with its limited Easter run, don’t be a sitting duck – make sure to see Honk! before its swan song!