My enduring memory of Peter and the Wolf is hearing it for the first time in a music lesson with Mrs Cobley in Year 3. Myself and my fellow 7 and 8 year olds listened under duress, sitting silently and staring at our desks, as Mrs C patrolled the aisles to ensure that we at least looked like we were concentrating on the music. Not ideal conditions for imaginative abandon and musical escapism – Prokofiev’s most popular symphony didn’t stand a chance with me when repeatedly used as a stuffy classroom tool. In fact, all my experiences of the 1936 work have felt pushily didactic, the symphony suffering from the expectation that it’s a route to get children interested in classical music. 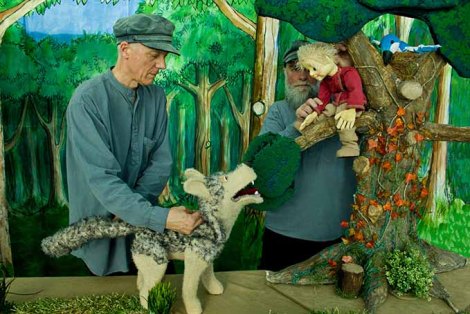 On The Other Hand’s theatrical adaptation seems to send up its supposedly edifying and slightly stuffy reputation. The production uses a recording that features a narrator with the received pronunciation of a BBC newsreader circa WWII (as opposed to the David Bowie, David Attenborough, Dame Edna Everage or even Philip Schofield (!) versions). Performers Ken Haines and Roger Lade troop out, greeting the audience with their own distinctly clipped accents, before wildly wielding old-fashioned teacher’s pointers to illustrate which instruments will be accompanied by which leitmotivs. The set and puppets are beautiful, detailed, and multi-textured: there’s a log cabin, with a just about visible candle burning behind a net curtain; copper-coloured vines run up the sturdy, bushy tree; Duck really can dive into the little reed-lined pond. This table-top world, along with the narrator’s cut-glass accent saying things like, “’It’s a lovely day,’ chirped the bird gaily”, makes it all feel like an episode of Watch With Mother (Andy Pandy, or The Wooden Tops). At the same time, the lush soundtrack and the pristine, idealized rural setting (Peter’s friend is a Disney-esque blue bird), as well as the show’s motivation – bringing classical music to life for a young audience – is reminiscent of Fantasia, and it doesn’t surprise me at all that Disney made a short animation of the symphony to accompany the film. Peter and the Wolf is very much of another time, a bygone, squeaky-clean age. It’s a polite, well-mannered story, with Peter a resourceful, compassionate hero, the wolf dispensed with in the most orderly fashion, and the only violence – the duck being swallowed – dulled by the fact it now lives, quacking, in the wolf’s belly.

I thought that a play of the symphony might ruin the point of Peter and the Wolf (or at least the explanation of its existence always given to me): to tell a story through music that it’s up to the listener to envision. But the focus on the puppetry takes the pressure off the music which, it turns out, makes it much easier to appreciate. The symphony is a slight 25 minutes, so Ken Haines follows the performance with a show and tell of puppets and puppetry-making. In the end, it’s not Peter and the Wolf that has the educational tone, but this engaging and insightful puppetry session. With On The Other Hand’s production, Peter and the Wolf becomes the gentle, harmless storytelling experience Mrs Cobley wanted us to have and I was so averse to. But, demonstrating all the contrariness I had as a 7 year old sat in her music class, it’s now the lesson I like most, and Haines’s interaction with, and exploration of, puppetry is the best bit.