In the first few moments of Wild Life FM, we hear a recording of the cast asking locals what a show about young people should include. One man gives an extensive answer: cuts to the Education Maintenance Allowance, he suggests. Cuts to housing benefits for under-25s. The increase in tuition fees. The Brexit vote. The impact of austerity. Limited employment opportunities. Lack of affordable housing. The show should be political, he says. It should be about how young people are having to pay the price for the economic collapse. 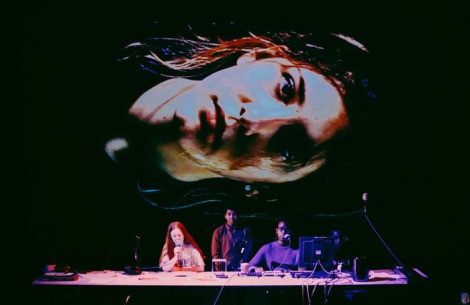 It’s a route recent stand-out productions about the reality of growing up today – Theatre-Rites’ The Broke ‘N’ Beat Collective and Zest Theatre’s What Once Was Ours –  have taken, focusing on issues like Brexit, the ‘Big Society’, and the struggle to be heard. But this line in Wild Life FM captures the show’s attitude: “I was told I have a lot to be angry about. They wanted me to be angry in the show. But I’m not.” Wild Life FM refuses to conform: to expectations, to genre, to structure, and the young cast who defiantly relate on their own terms. The show is as much about Teresa May gifs as adolescent homelessness, and YouTube epic fail compilations as much as first kisses full of half-eaten doner kebabs. Wild Life FM is sketch show meets gig-theatre meets reddit, as music, stand-up, audience interaction and an interesting internet history combine to explore what it’s like being young in 2018. 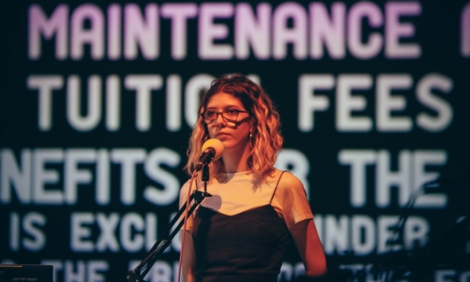 The current political landscape may offer a shitty backdrop, but whether or not we leave the EU, being a teenager will always be a time of great urgency and huge consequence. “Being 17 really sucks balls,” Noah Horne tells us before performing a song on the harp about a failed flirtation which turned him into “a miserable bitch”, whilst personal milestones are projected onto a screen behind: “19 years & 10 months: the first time I went to Croydon”, “14 years & 5 months: the first time I saw a cock”.

A heartfelt ballad is performed on one part of the stage while elsewhere, someone’s googling questions about Harry Potter’s sex life. Songs that stylistically seem to promise sweetness actually recount sexual exploits in alleyways or imagine exploding poodles. A prank call to Premier Inn, profound questions about representation, and fan-girling over Jon Bon Jovi: Wild Life FM crashes together, and switches between, different ideas like the stage is multiple tabs of the same browser. It’s disjointed, distracted, surprising, and over too soon, not unlike, it seems to suggest, being young in the UK today.