A few years ago, a contributor sent me a review of a concert for babies that she had attended with her child. Almost the entire word count was dedicated to the insufficient buggy parking spaces at the venue, and the late opening of the auditorium doors. At first, I wondered whether it was publishable – was it the equivalent of a food critic writing about the quality of the table cloth with only a brief word about the duck a l’orange? But the review helped me appreciate – as a critic who sees most shows alone – that taking children to the theatre isn’t just a cultural experience to be had, but an outing to be carefully managed. When logistics play such a crucial part in the overall experience, the venue’s facilities are just as important as the main event. There was a window in the baby’s timetable – in between naps and feeding and the possibility of prolonged activity turning to potential grouchiness – in which the concert was supposed to fit. The matter of a mere 15 minutes meant the musicians played to a room of gently snoring infants cradled in their frazzled parents’ arms. 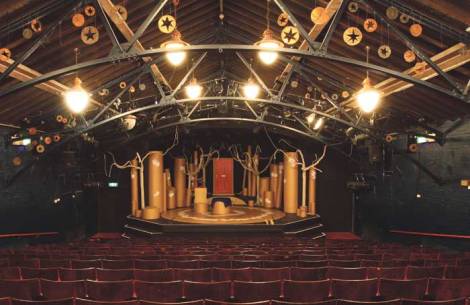 It’s not just families for whom the theatrical experience can be significantly impacted by the venue, or critics writing about children’s theatre who think it’s important to include in their write-up. Fiona Mountford’s Evening Standard review of All or Nothing opens with a withering assessment of The Ambassadors Theatre, finding it pretty galling that audiences are expected to pay £65 “for a stalls seat in a dilapidated theatre for this grimly mediocre musical, then to spend the entire interval queuing for one of just five ladies loos in the building (and a mere two for the whole of the stalls), only to find that neither the taps nor the hand drier work properly.” Comfort, convenience and value for money are important: whether it’s unexceptional or extraordinary, you’re much more likely to enjoy a show if you don’t spend an age queueing for a wee before it starts, in an increasingly harried panic that the lights are about to go down.

One venue that seems to be doing a better job is the Bridge Theatre. Only a few months old (it opened in October 2017), the Bridge Theatre may be young in years but, some have said, it is still a commercial theatre made in the sometimes dubious mould of its older West End brothers. Though it may not be all that different or progressive when it comes to programming and vision, where the Bridge Theatre really does stand out is in the building itself. Nick Hytner apparently spent a great deal of time in promotional interviews for the theatre stressing the number of toilets there are, clearly aware that audiences would find the spotlessly clean, fully functional, and virtually queue-less loos a major selling point to be banged on about to anyone who will listen. (I proved him right after my first visit, describing the lavoratorial luxury to everyone who asked about the theatre.) The foyer is massive and the leather seats aren’t only comfy but smell divine, as does the food (especially the much harked-on about madeleines). 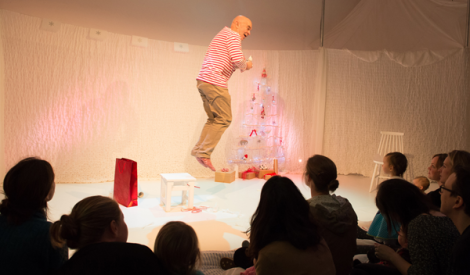 A resource like SeatPlan gives those planning a theatre trip a heads-up on what to expect from the venue they intend to visit, with insight into each section of the auditorium, from legroom to nearest toilets, details on accessibility and location, and, ingeniously, seat reviews, often with photos, so you know exactly what you’re getting for your money (perhaps a feature Fiona Mountford would particularly enjoy!) Some additional information on this website could be really helpful for family audiences: are booster seats available?are there baby changing facilities? is there somewhere to store pushchairs? is there a policy on leaving and re-entering the auditorium during a performance? what’s the price of an icecream (so parents can decide whether to budget for the inevitable request)? and so on.

Venues who take their role in the theatre experience seriously, from arrival to performance to departure, have the potential not only to transform that experience, but to become an essential element of it. At Polka Theatre, for instance,  dipping into the fancy dress box, playing in the playground or eating in the café’s famous train compartments are just as much a part of any theatre trip as the play. Sarah Argent’s Scrunch at Unicorn Theatre is another best practice example, with a level of forethought my contributor would definitely have benefitted from. Here, the efforts made to accommodate the audience “felt like an extension of the piece itself, guiding parents and their very young children through one of their earliest experiences of theatre together.” Theatres targeting young audiences need to recognise that buggy spaces and baby changing facilities can be just as important as what’s on stage.