In the recent movie A Quiet Place, the characters have to live in terrified and complete silence – any sound brings certain death at the hands of some sort of monster. (Or at least, that’s the impression we get from the trailer – it looks far too scary for us to actually see.) At the start of Baba Yaga – a new take on a Russian folktale – Vaselina (Shona Reppe) lives under comparable conditions, though her silence is enforced by social opprobrium, rather than a mysterious beast.

Vaselina, the meek receptionist at Poultry Park Apartments, is at the mercy of the fancy flats’ residents and their stringently enforced rules. Every twist of her lip balm (Nivea, not Vaseline, if you were wondering), every scribble of her pen, and every rumble of her tummy attracts instant censure from the sound-sensitive tenants.

But one of the building’s occupants is unlike the others: the quirkily-dressed (her hat is a handbag), gurning Baba Yaga who doesn’t give a fig about rules. When a throbbing baseline emanating from her penthouse home shakes the building, her furious neighbours demand that Vaselina put a stop to it. With every floor the nervous receptionist ascends, another rumour about Baba Yaga floats in: she has chicken’s legs, she files her teeth into points…

In fact, Baba Yaga (played wonderfully by Christine Johnston) is a more fantastic, complex force of eccentric villainy: mysterious, menacing yet maternal, with a dash of unsettling kookiness and an insatiable appetite. On this occasion, the offensive beats blaring from her flat are to coax her flowers into bloom, a job she completes by playing two recorders in harmony via her nostrils, though this isn’t the last of her infractions. With every offence Baba Yaga commits, Vaselina is called upon by the other residents to put her right. As time passes, the shy receptionist is increasingly fascinated by, rather than fearful of, the troublesome tenant who begins to morph from menace to mentor; Baba Yaga, on the other hand, just seems increasingly hungry… 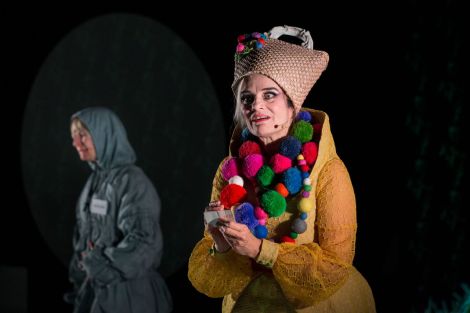 Baba Yaga’s success is down to the totality of the weird world it creates, crafted expertly through its set (from Design Realiser Ailsa Paterson), projections (with animations by Chris Edser), costumes (designed and made by Selene Cochrane), sound effects and songs (by Sound Designer and Composer Peter Nelson) and the phenomenal physicality of the leading ladies. The residents’ grotesque faces are made all the more creepy by their over-sized projections staring out, the threat of their complaints quite literally hanging over Vaselina’s head: a screen dangles just above her, filled regularly with an angry, grumbling face. Johnston and Reppe engage in what can only be described as facial gymnastics, their elastic features conveying the stark differences of their characters with masterful comic timing.

Baba Yaga weaves into this world a compelling reworking of the old Russian tale, all about rule-breaking,  redemption, and personal fulfilment. The show brings out the tension between apparent witchery and wisdom, portraying an unusual kind of mutual empowerment, and keeping the audience gently unnerved throughout. Hilarious and thrillingly odd, Baba Yaga leaves you unwrapping its richness in hindsight, and desperate to try playing the recorder with your nasal passages.